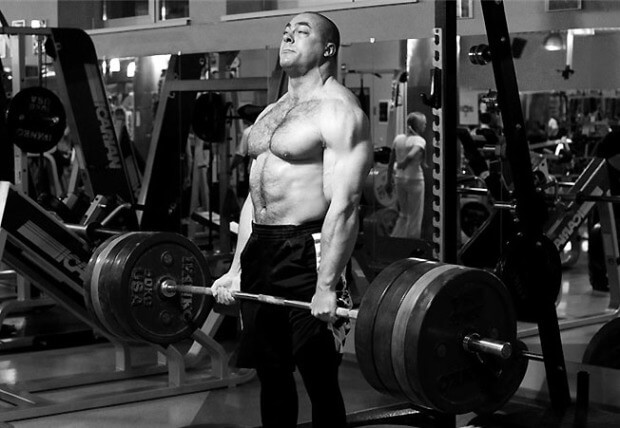 I want to be straightforward about what this article IS, and what it ISN’T.  It’s an explanation of why a rounded back deadlift tends to allow people to pull more weight.  It’s NOT a recommendation to deadlift with a rounded back, and it purposefully doesn’t address the potential for injury.  I’m not a physical therapist.  I have my own opinion (the fairly kosher PL opinion that thoracic flexion is probably okay, but lumbar flexion should be avoided), but I am by no means an expert on injury mechanisms and prevention.  The question of “what lets me lift the most weight?” and “what’s the safest way to lift the weight?” are two different questions, and I’m only addressing the first one, because the second is well outside my scope of practice.

With that out of the way, let’s dive in.

What are you doing in the deadlift?

For starters, the deadlift is not a squat.  I don’t mean that in the way most people mean it.  People who say this usually mean “you should start with your butt high, rather than starting with a low hip position to ‘squat the weight up.'”  I’ll be addressing this misunderstanding later in the article.

All I mean is that the forces your body has to overcome are quite a bit different.  The deadlift doesn’t have nearly the balance of knee and hip extension demands that the squat does.  Yes, the knees DO have to extend in the deadlift, and yes, knee extension can aid somewhat in hip extension as I discussed in my last article, but these factors do not influence performance in the deadlift NEARLY as much as they do in the squat.  Heck, a properly performed deadlift with the bar close to the shin until it clears the knee, has an external moment arm for the knee extensors with a length of basically zero.  As an aside, that’s a major reason most people can deadlift more with a trap/hex/diamond bar – your knees can shift forward so your quads CAN actually contribute substantially to the movement, rather than being constrained by keeping the bar in front of you and the shins essentially vertical.

So, at least in the lower body, hip extension is the primary limiting factor.  Other things can limit the deadlift, such as grip and the ability to extend the back again once it goes into flexion, but from the waist down, it’s your ability to produce enough hip extension torque – getting enough juice from your hammies and glutes – that’s the make-or-break factor.  We’ll come back to this later when we talk about pulling with a rounded back.

So if a deadlift isn’t a squat, is it a problem if I pull with my hips low?

Everyone tells me I stiff-leg my DLs and that my hips are way too high.  Is that a problem?

You cannot pull with your hips too low.

When the bar breaks the floor, it will be roughly below your shoulder joint.  It may be slightly behind your shoulders if your lats are properly engaged, but the very small shift in bar position with lat engagement (only 2-3 inches) doesn’t produce a very large shift in body position, so for our purposes here, we can just treat the arm as a vertical segment to simplify things.

Furthermore, the bar won’t leave the ground until your shins are basically vertical.  There may be a *very* slight forward shin angle for the first inch or two, but for the bar to have a clean vertical path, the shins have to straighten out pretty quickly, otherwise the bar will shift forward and you’ll lose your balance.

So to clarify this concept in nice tidy terms, we’ll treat your arm and shin as fixed, vertical segments when the bar breaks the floor.

That leaves us with three basic variables we’re working with: the lengths of your arms, femurs, and torso.  Those are the three basic factors that determine how your deadlift will look.  Not how an “ideal” deadlift on the Vitruvian man will look, but how YOUR deadlift will look.  (At least for the conventional deadlift, although hip abduction/adduction factors in SLIGHTLY, that’s not going to make a huge difference)

Rather than talk through how these three variables will influence your starting position (nothing is more imposing than a wall of text of biomechanical jargon), I made some doodles in MS Paint to illustrate the effects that different segment lengths will have on your deadlift form.  In all of these, the torso length is expressed relative to the length of the femur. 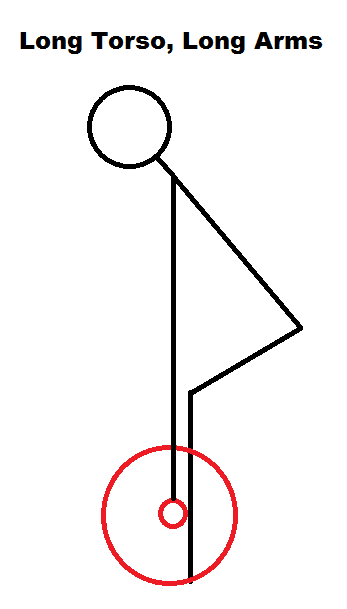 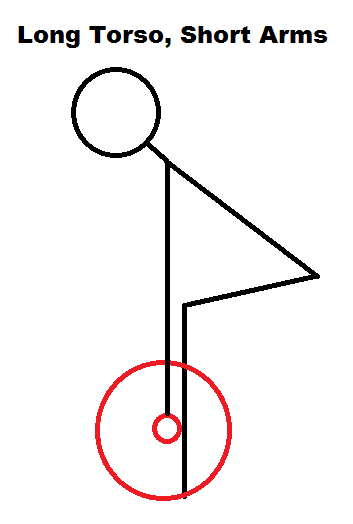 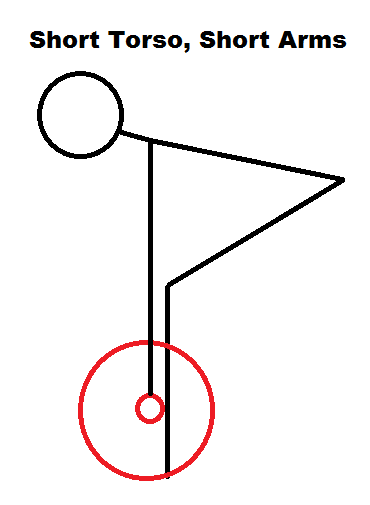 In each of these, the bar is directly below the shoulder, and the tibias are vertical.  This is the position in which the bar would break the ground.

In some videos, it may appear that someone is pulling with their hips low because they squat down while setting up for the deadlift, but watch when the bar actually breaks the ground.  That is the hip height dictated by their anthropometry and the constraints of the lift.  A couple good examples are Mark Henry and Misha Koklyaev.

Deadlifting with the lowest hip position possible will tend to be the most efficient way to pull the most weight.  Can you start with your hips artificially higher?  Of course.  However, that does two things that are typically undesirable:

1) it decreases, even more, the amount of assistance you’d otherwise be able to get from your quads.

2) since higher hips can only really be accomplished by allowing the knees to drift backward (remember, we’re constrained by some basic geometry here.  Since the lengths of the segments aren’t changing, if the hips raise and your hands stay on the bar, your knees will have to drift backward), you’ll typically wind up with your hips even farther behind the bar, meaning more hip extension torque – which is already the limiting factor – to overcome. 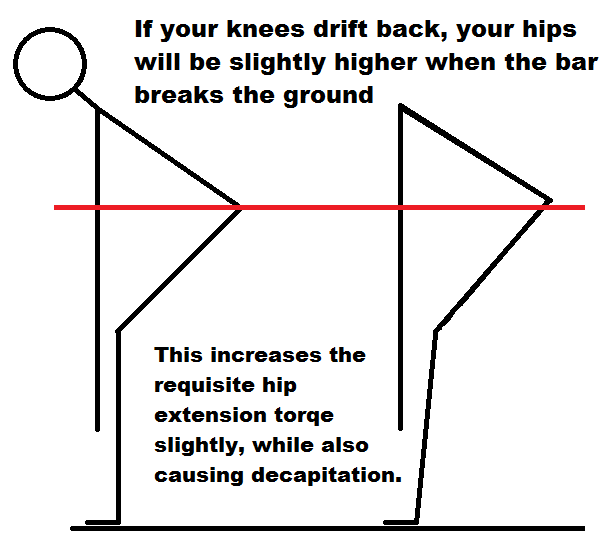 So here are the takeaways from all this:

1) Pull with the lowest hip position possible.  No, you’re not “turning the deadlift into a squat.”  You simply have body proportions that make that the most advantageous position for you.

2) If it looks like you’re “stiff-legging” a deadlift, but your knees aren’t drifting backward substantially when you pull, you probably aren’t doing anything wrong.  A combination of long legs and a short torso (perhaps paired with short arms) will give the lift a “stiff-legged” appearance, but that’s simply how the deadlift will look for you with your body proportions.  No amount of training to get your hips lower will make much of a difference.

Why can you lift more weight when you round your back?

Remember, hip extension strength is the primary limiting factor for the deadlift.  With that in mind, the explanation is very straight-forward.  Rounding your back a bit shortens the length of the torso in the sagittal plane.  In non-nerd speak, it lets you keep your hips closer to the bar front-to-back so they don’t have to work as hard to lift the same amount of weight.  It’s actually very similar to how you can lift more weight in the low bar squat than the high bar squat – dropping the bar a couple inches lower on your back effectively “shortens” your torso so, all other things being equal, it requires less work from your hips to move the same amount of weight. 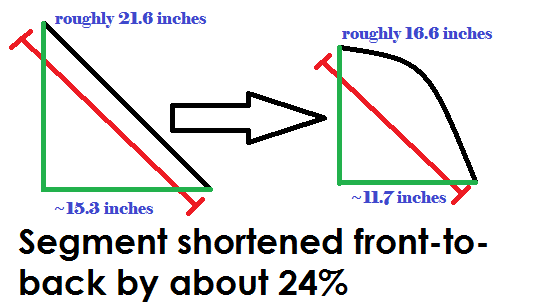 The two black lines in the above picture represent your spine in the deadlift (yes, natural kyphotic and lordotic curves, etc.  For the sake of simplicity, we’re just assuming it’s flat.  It doesn’t change the point, and straight lines are easier to draw in MS Paint.).  The numbers assume a lifter is 6 feet tall with average body proportions – 72 inches tall, the torso is about 30% of total body height for the average person, so that gives us 21.6 inches.

With the spine in a neutral position, it’s about 15.3 inches “long” front-to-back.  With some (pretty substantial) rounding, that number is decreased to ~11.7 inches.  That change in length front-to-back represents a huge decrease in the amount of hip extension torque that would be required to lift any given weight.

Don’t get hung up on the 24% number, thinking “oh, if I pull 500 with a perfectly flat back, I should be able to pull 620 if I let my back round!”  That’s just one example, that would change based on degree of rounding, whether your lats, traps, and spinal erectors are actually strong enough to get your back extended again after it rounds, and it would also be counterbalanced somewhat by the increased tension on the glutes and hamstrings that would come with the increased hip flexion required to pull with a flat back.  Furthermore, as your spine flexes more, your hip position also changes so that your shoulders will still be over the bar (i.e. your torso still has to stay roughly the same length, front-to-back, as your femur), which negates a pretty fair amount of the advantage. Bret Contreras and Andrew Vigotsky informed me that based on some modeling they’d done after this article was published, the difference is reduced to about 6%, which seems much more realistic.   Your body isn’t a physics equation – this is just to illustrate the main reason why you can pull more with a slightly rounded back:  for any absolute load, the required hip extension torque needed to lift it is decreased if the spine flexes a bit.

Who better to illustrate this with than the champion of round-back deadlifters himself: Konstantin Konstantinovs.

Here’s a screen shot of right when the bar breaks the floor, showing where his spine and hips are when he’s actually deadlifting, and roughly where they would be if he kept his back completely flat.:

As you can see, his hips would be lower in his start position, and they would be quite a bit farther behind the bar, requiring more hip extension torque to lift the same weight.

He has deadlifted 939 in competition, but has said in interviews that he once tried to train his deadlift without letting his spine flex at all, and was unable to pull much over 700 pounds.  Obviously an extreme example of this principle.

1) Contrary to what the internet tells you, you can’t “turn your deadlift into a squat.”  All other things being equal, the lower your hips are when the bar breaks the ground, the more efficient your deadlift will be.  Otherwise you’d RDL more than you deadlift.

2) If you “stiff-leg” a deadlift but the bar stays close to your shins and your knees don’t drift back a ton, it’s probably not something to worry about.  That’s just how you deadlift based on your body proportions.

3) Rounding your back makes the deadlift more mechanically efficient by reducing how much hip extension torque your hamstrings and glutes have to produce in order to lift any given weight.

4) Konstantinovs was disappointed that he could “only” deadlift in the low 700s with a flat back.  So in closing, let’s all celebrate his sheer manliness by watching him destroy a 939 deadlift, beltless.