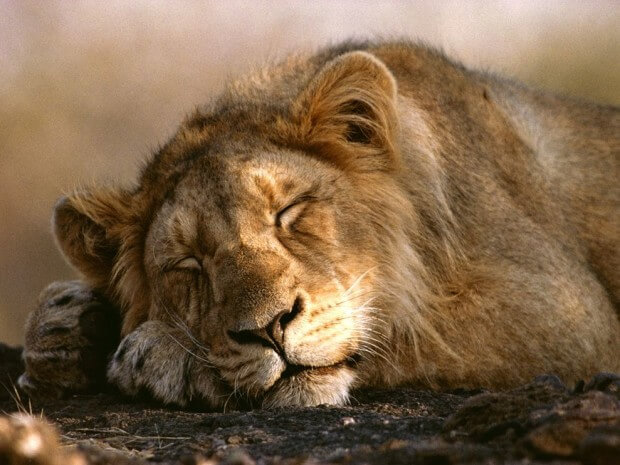 The title of the study says it all.

If there’s one subject I tend to get preachy about, it’s sleep.  It’s not exciting like a new exercise protocol or as sexy as some new diet trend, so it doesn’t get the coverage it deserves.  But it is absolutely crucial that you get a full night of sleep.  This is probably going to turn into a 3-4 post series, so I want to start off with something tangible that we can really sink our teeth into to get the ball rolling.

Today we’re talking about how sleep can help make you sexy.  Putting aside the considerable health implications of neglecting sleep, we’re starting off on a topic more immediately relevant to most of you – body composition – losing fat while holding onto muscle.

So, without further ado, let’s dive in.

The study at hand was conducted to ascertain whether amount of sleep would affect results while dieting.  It built upon previous studies showing hormonal disturbances with lack of sleep (which I’ll cover in more detail in a later post), and increases in appetite.  So the authors wanted to know whether those changes would actually manifest themselves in meaningful body composition changes when on a controlled, low calorie diet.

The subjects were 10 overweight (average BMI 27.4) but otherwise healthy people, mostly in their late 30s or early 40s.  They were excluded from the study if they were heavy drinkers, smokers, had jacked up sleep habits, had any major abnormalities on a physical, or were habitual heavy caffeine users.  In short, they were pretty average, middle aged folks.

For 14 days, participants had to stay in bed for either 8.5 or 5.5 hours per night.  At least 3 months later, participants swapped conditions.  Food intake was restricted to 90% of resting metabolic rate.  Doubly labeled water was used to assess energy expenditure (I won’t go too far afield explaining how it works, but rest assured that doubly labelled water is a VERY good method for assessing energy expenditure accurately).  Meals were standardized and weighed to ensure calorie intake was controlled for as tightly as possible.  In short, it was a very well-controlled study.

Both groups lost about 3kg (6.6lbs) during the study, BUT…

It doesn’t get much better for the poor sleep deprived subjects from there, either….

Hunger was higher.  This was accompanied by greater increases in acylated ghrelin – a hormone that promotes hunger.

Respiratory quotient was higher.  That means that for each calorie burned, more of the energy came from carbohydrate, and less of it came from fat.

Well, for one, the participants were sedentary.  That makes it a little harder to generalize results since resistance exercise helps you retain more muscle while dieting.

Also, at least in the eyes of most people reading this, protein intake was laughably low (about 65g/day).  [if you want to find out how much you SHOULD be eating, and how to make the most of it, find out here].

It should be noted that lean mass also includes water.  So of the 3kg lost, only about 1.2-1.7kg (2.7-3.8 pounds) of that should come from tissue loss (your body theoretically gets about 3500 calories from a pound of fat, and 2500 from a pound of muscle, so with an overall deficit of 9660 calories on average, some of those 6.6 pounds almost certainly came from water). 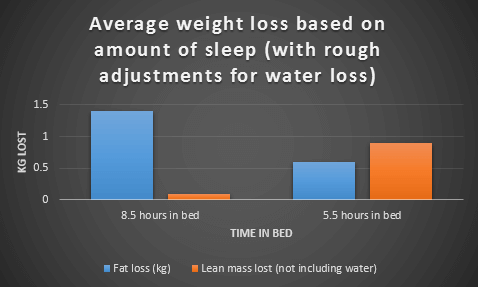 I’ll admit, that’s just a rough estimate, but it probably gives a little clearer picture of what was actually lost by both groups.  The 8.5 hour group probably lost almost all fat and kept their lean tissue quite well, in spite of a 1450 calorie diet, low protein, and no exercise.  The 5.5 hour group, no matter how you slice it or dice it, lost a considerable amount of lean tissue, whether that be from muscle, bone, or organs.

If we wanted to go into the weeds of the effects sleep deprivation on cortisol, and cortisol’s effects on water retention, there’s even the potential that the 5.5 hour group was holding onto a little more water, which means even more of their lean mass loss would be muscle… but we’ll be charitable.

I understand if you’re a little skeptical about how well this would translate to you if you’re eating enough protein and you’re lifting.

Sure, you’d probably do a better job of holding onto lean mass than the 5.5 hour group in this study, BUT we’re probably just talking about the degree to which you stop the bleeding.  Maybe instead of 40/60 it would be 60/40 fat/lean.  That’s still not painting a rosy picture.

Mechanistically, I have a hard time seeing how improved diet and exercise would mitigate ALL the lean mass loss that comes from losing sleep.  There are some well-documented hormonal changes (I’ll talk about those in a later post), a higher RQ means less fat is burned proportional to total energy expenditure so that energy HAS to come from stored glycogen or protein, and acylated ghrelin does some nasty stuff on it’s own.  To quote the authors, “Acylated ghrelin has been shown to reduce energy expenditure, stimulate hunger and food intake, promote retention of fat, and increase hepatic glucose production to support the availability of fuel to glucose-dependent tissues.”

Literally the best case scenario with a shift in RQ is this:  with adequate protein intake and resistance training, you’re still able to hold onto your lean mass.  However, for every calorie you burn, more of it comes from stored glycogen, and less of it comes from stored bodyfat.  Less fat burned per calorie burned means you’ll have to diet longer to get lean.  More glycogen burned per calorie means you’ll have less energy for your workouts.  Elevated acylated ghrelin means you’ll be hungrier.  So, if you’re not sleeping enough and doing everything else 100% right, the best possible scenario is that you have to diet for longer, while having crappy workouts and being even hungrier all the time.  Sounds like more fun than a barrel of monkeys, right?

It’s as simple as that.  Let’s take it out of the realm of “sleep helps with recovery,” and let’s forget for a moment about the health consequences or fogginess that come from not sleeping.  We have concrete evidence that sleep is essential for optimal body composition.  Lack of sleep directly makes it harder to burn fat and increases your risk of losing lean mass.

If it’s worth it to you to prioritize training and prioritize nutrition (as seems to be the case for almost everyone), make a point of also prioritizing sleep.  Good sleep will magnify the effectiveness of the other two, and bad sleep will be a huge obstacle to your physique goals.

If you’re interested in reading part 2, which is geared more at training implications, here it is.

Next: Succeed Every Day: A Complete Guide to Habit-Forming →
Muscle Math →