We recently completed a yearlong study assessing factors contributing to injury risk in powerlifters. This article is the first in a series detailing our results.

Last year, we published an article looking at predictors of injury in powerlifters. This article was based on cross-sectional data. In other words, I sent out a single survey asking whether people had ever been injured, asking what types of injuries they’d sustained, and asking about factors that may affect injury risk. 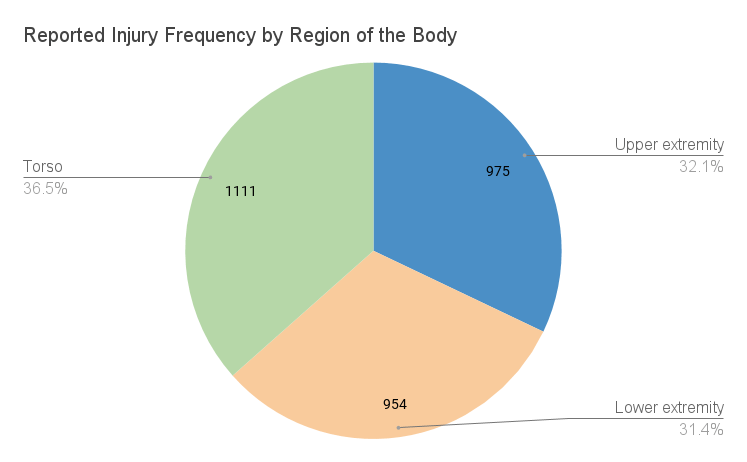 The two strongest independent predictors of acute injuries seemed to be sex (even when controlling for training age, men had sustained more injuries than women) and chronic injury status. Notably, training variables (volume, intensity, and frequency) did not seem to be predictive of injury risk.

However, cross-sectional research has many drawbacks. Longitudinal research is generally better for addressing questions like these. As such, we decided to do a year-long study to assess factors contributing to injury risk in powerlifters. The results of that study are the focus of this article and will be the focus of several subsequent articles.

Before we get into the results of our study, however, it’s important to understand the current state of the evidence. Several previous studies have assessed injury risk in powerlifting, and they’ve been summarized in a review paper by Keough et al (here’s a free-full-text version). 1 Most studies have used a fairly narrow definition of injury similar to: “any physical damage to the body that caused the lifter to miss or modify one or more training sessions or miss a competition.”

The general consensus is that powerlifters sustain 1.0-5.8 injuries per 1,000 hours of training, corresponding to 0.3-2.1 injuries per year. That may seem like a pretty low injury rate, but it belies how long injuries tend to stick around and affect training. For example, Siewe et al found that 43% of powerlifters reported currently being injured at the time of completing a survey, in spite of a very low overall injury rate (1.0 injuries per 1,000 hours). A more recent study by Strömbäck et al found that 70% of powerlifters were currently injured, using a pretty broad definition of injury (“any condition of pain or impairment of bodily function that affects powerlifters’ training”).

This seems to indicate that powerlifters don’t get injured very often, but that when they get injured, their injury affects their training for a pretty long period of time. However, multiple studies report that injuries sustained during powerlifting training tend to affect lifters for less than two weeks; these divergent findings may be due to different definitions of what constitutes an injury. In other words, injuries may only necessitate time off or significant training modifications for two weeks, but may still affect the lifter in some way for a longer period of time.

In terms of risk factors, some studies (on athletes in all weight-training sports; not just powerlifting) indicate that women have a slightly lower overall injury rates than men, but slightly higher rates of knee injuries. Contrary to our cross-sectional study from last year, other research has found that elite lifters may sustain injuries less often than non-elite lifters. Finally, a couple studies on strongman athletes indicate that younger athletes and heavier athletes may sustain injuries more frequently than older and lighter athletes, but that older and lighter athletes may sustain moderate or severe injuries more frequently. None of these risk factors seem to have a particularly strong impact on injury risk, however.

So, that’s the backdrop of the current research in this area. I wanted to begin with a rundown of the current research to point out that our study certainly isn’t the only one on this subject, and that a single study shouldn’t be taken as absolute proof or absolute rejection of a given hypothesis. Our results match prior research in some findings, but contradict prior research in other findings. I only point that out because I saw a lot of people interpreting our first article in terms that were entirely too black-and-white. So remember that we’re dealing with evidence and probability, not absolute proof or refutation.

This first article will only detail some of our most basic results. Subsequent articles will address more of the nitty-gritty details.

Potential study participants were recruited in September 2017 via a variety of direct contact and social media methods. Those who expressed interest in participating in the study were excluded if they were under the age of 18. Information was collected via a Google Forms survey each month, covering a period of 30 days prior to receipt of the survey. An example survey can be found here.

Let’s quickly define some terms to make sure we’re on the same page:

Injured: Study participant who recorded an acute injury during the course of the study based on the following definition.

“Acute injury is defined as 1) any bone fracture, muscle/ligament/tendon tear, or joint sprain/dislocation/separation 2) any injury that necessitates a trip to an MD or PT (not a chiropractor or massage therapist) 3) any injury of any variety that necessitated taking time off from training for two weeks or greater. For example, a knee injury that required you to stop squatting for three weeks even though you never stopped benching would be considered an acute injury. Being sore and skipping one workout would not be considered an injury.”

Lost to follow-up: Study participant who did not complete all required questionnaires.

Healthy: Study participant who completed all questionnaires and did not record an acute injury.

One primary drawback with this study was the high proportion of individuals who were lost to follow-up (LTF). Usually, there are more robust mechanisms in place to ensure study compliance, but due to the entirely remote methodology we used, this was likely to happen regardless. This will be discussed in depth in later articles.

Figure 1 presents a histogram of the sex and age of the participants, and Figure 2 is a histogram of the allometrically scaled initial total of each participant. The total for each was the greater of actual reported total or the sum of squat, bench, and deadlift values. You’ll note that the n values change across the graphs, as certain participants are included/excluded based on errors they have in their data entries.

We will be writing several additional articles on the results from the study, but we wanted to provide a quick overview of what was accomplished and what general areas of inquiry we will be investigating. As such, below are two entirely unadjusted results. When we say that something is unadjusted, there is no consideration for any other relationships the variables may have with each other or other variables; we are not stating that there are no other variables worth considering, just that they are not considered in this instance.

The following graphs are called Kaplan-Meier survival curves. They are commonly used in epidemiological or medical studies to compare time until death (or another event) between two or more groups. The x-axis has a unit of time (days in this case), and the y-axis has the proportion of the groups that have made it to that point without experiencing the event of interest (injury). The curves start at time zero and 100% survival. Within each group – in our case, men and women – each vertical step down indicates one or more acute injuries. Each of the step downs on the y-axis decreases the proportion of the group that is injury-free. The line travels horizontally when no acute injury has occurred. You will note that the vertical steps become larger near the end of the x-axis. This is because as the population gets smaller, either from drop-outs or injuries, each subsequent injury will decrease the overall survival by a greater proportion. For example, if there was an event at Day 20 where the population decreased from 100 to 99, the y-axis drop would be smaller than at Day 200 where the population would decrease from 10 to 9. Even though the same number of events occurred, the overall proportion is much larger. For our immediate purposes, Figure 3 and Figure 4 are for visual/qualitative comparison.

1. Unadjusted, there is no difference between male and female injury rates.

2. Unadjusted, a strong preliminary predictor of future acute injury is the presence of some physical limitation at the start of the study. 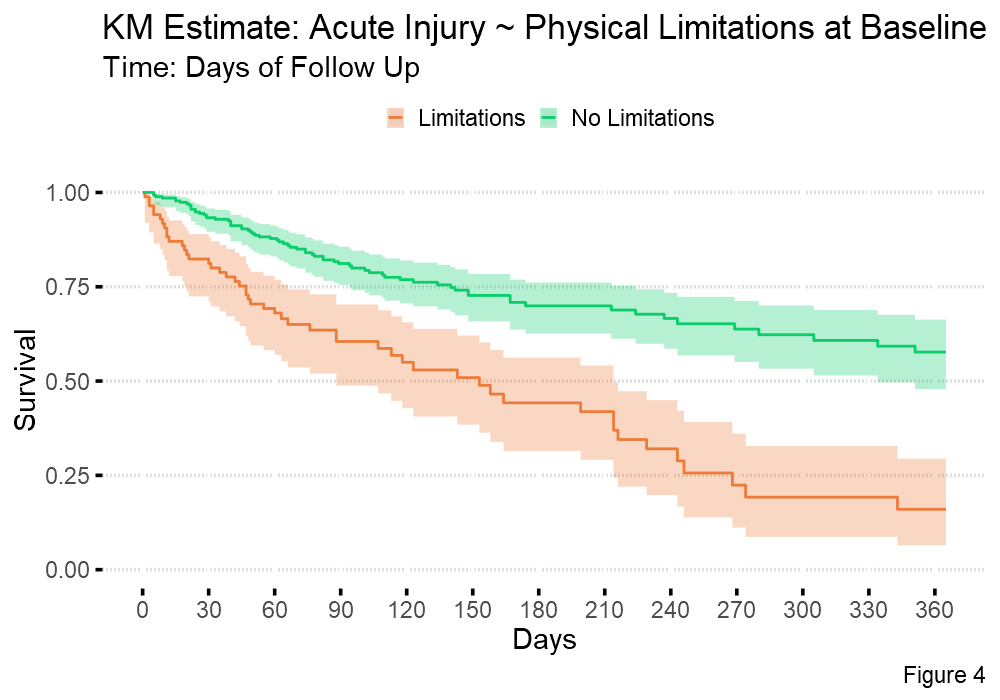 In addition to the static articles, we have created an interactive data explorer that can be found here. The data explorer will likely be updated with new functionality that matches the content of each new article, so continue to check back.  Thank you to Ashley Bleggi for making this app.

This article is just the start of a series on the results of the study. We plan on writing several more on a variety of topics all touching on either injuries or improvement. Article topics to be considered include deloads and injury, training styles and improvement, and MRV and injury. If you have ideas or questions about specific concepts you would like to see covered in future articles on the study, let us know in the comments.