Although calories and mass are intrinsically linked, we’ve all experienced changes in weight that don’t match what we expected based on changes in diet and exercise. This article examines those situations to help clear up the confusion.

This is the second part of a two-part series. If you missed Part 1 (From Mass to Energy: The Basic Physiology of Calories), it may be worth going back and reading it before diving into this article.

This article picks up right where the first left off. Now that you have a basic understanding of the way energy balance drives changes in body mass, I want to discuss a couple of circumstances where that may not seem to be true:

Short-term fluctuations in weight are almost entirely attributable to changes in body water and, to a lesser degree, the amount of food in your gastrointestinal tract.

If you gorge yourself and overeat by 10,000 kcals one day, that excess energy would be stored as about 3lb (about 1.4kg) of fat at most. However, you may wake up the next day weighing as much as 10lb (4.5kg) more than normal. Similarly, if you fasted for two days, assuming you maintained your normal activity levels, you’d probably open up a big enough energy deficit to burn about 1.5-2 lb (0.7-1 kg) of fat. However, your weight on the scale would probably drop by 5lb (2.4kg) or more.

In the first installment of this series, I discussed how energy balance is the only way to explain long-term changes in weight. However, in the short term, you can’t discount the effects of water weight.

Water accounts for about 60% of the mass of an average male and about 50% of the mass of an average female. However, there’s quite a bit of variability around those averages. In a study of 458 males and 265 females (1), the range for males spanned from 38.5-73.5%, and the range spanned from 27.4-70.9% for females. The variability within a single individual isn’t nearly that large, of course (otherwise, you could lose around 40% of your body mass just from going from a super hydrated state to a super dehydrated state), but there’s a fair amount of room for fluctuations.

Things that can influence those fluctuations include fluid consumption, salt intake, carbohydrate intake, stress, and changes in hormone levels.

The impact of carb intake on total body water can be quite large. Remember, each gram of glycogen is stored with 3-4 g of water, so going from full glycogen stores to empty glycogen stores (or vice versa) can easily account for a ~3kg (6.6lb) shift in weight. Many people observe this when trying low carb diets for the first time. They lose a ton of weight really quickly, making them think that the diet is working like magic when, in reality, most of the initial weight loss is simply water loss due to glycogen depletion.

Furthermore, the impact of stress and hormonal fluctuations on water storage is very noticeable for many women near the end of the luteal phase of their menstrual cycle (2).

If you weigh 80kg, fluctuations between 78-82 kg may be due to fluctuations in water (glycogen, salt, hormones) and not require any changes in long-term energy (fat, protein) storage.

For these reasons, if you’re interested in tracking your weight change, it’s important to pay more attention to trends rather than day-to-day fluctuations. Weekly averages work well also, as normal variations in weight will typically wash out over the course of a week.

I think most people are aware that water shifts can cause weight fluctuations, but more people get hung up on unpredictable changes in weight when they’re taking deliberate actions to gain or lose weight.

Remember, change in energy balance = calories in – calories out.

The “calories in” side of the equation is what gets most of the press, and is the easiest to quantify. It takes a bit of conscientiousness with nutrition tracking, but it’s not rocket science.

However, unless you’re tracking (or just have uncommonly regimented dietary habits), odds are pretty good that you misestimate the amount you’re actually eating. A seminal study from the New England Journal of Medicine found that people who reported problems with weight loss underestimated their calorie intake by nearly 50% (5). While I don’t have solid data on “hardgainers,” in my experience, they tend to grossly overestimate their caloric intake by similar amounts as well. So, the first potential problem is that your weight isn’t changing the way you expect it to because you’re not actually eating the amount you think you are.

NEAT is the amount of energy you burn each day for any sort of physical activity that’s not purposeful exercise. It includes everything from fidgeting at your desk to walking through the supermarket to doing house work to standing up when you could be sitting down. Crucially, NEAT tends to go up when calorie intake increases, and it tends to go down when calorie intake decreases, offsetting a portion of that energy deficit or surplus you thought you were creating via changes in calorie intake (6, 7). Of note, however, is that NEAT reductions during calorie deficits tend to be larger than NEAT elevations during surpluses, on average (though that may not be true for all people; 10, 11). 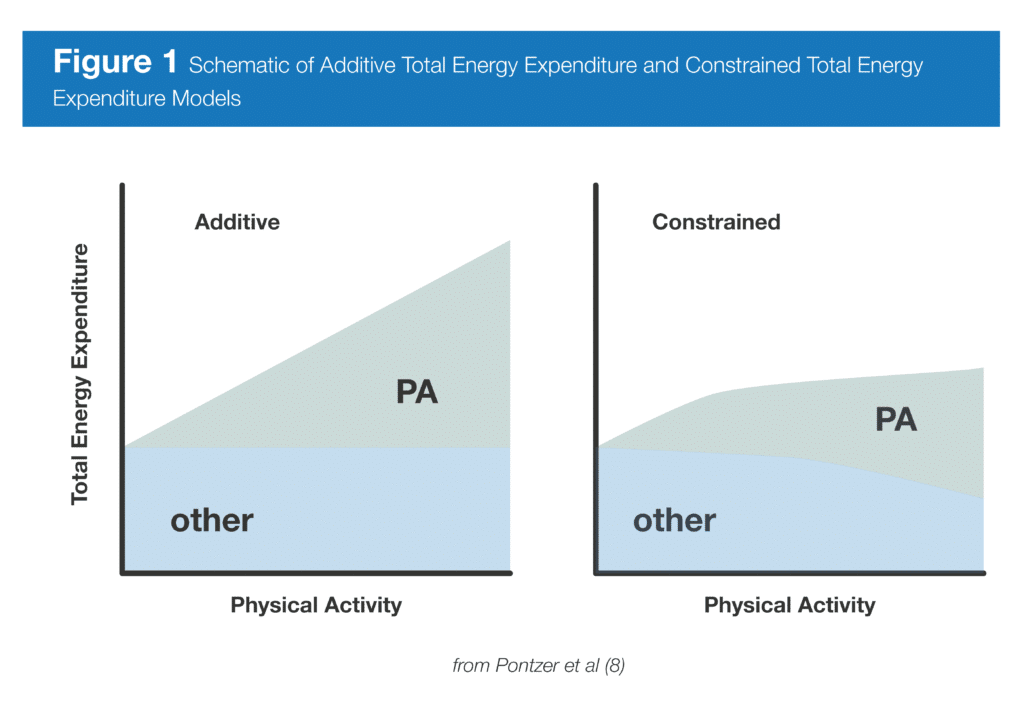 Finally, changes in body mass and food consumption will cut into deficits or surpluses. When you lose weight, your basal metabolic rate decreases and anything you do just inherently burns fewer calories, while the opposite is true for weight gain. Also, when you’re eating less, the impact of the thermic effect of food (TEF; the amount of calories you burn digesting your food) will be smaller, and the converse is true when you’re eating more.

Put all of this together, and you can start to understand why changes in weight can be unpredictable. Crucially, in most cases, you won’t gain or lose weight as fast or as long as you think you will based on changes in calorie intake. Changes in NEAT, changes in TEF, changes in body mass, and changes in basal metabolic rate will all work to cut into the deficit or surplus you’re trying to create. In my experience, a lot of people have a “dead range” of energy intake, where changes in calorie intake really don’t seem to affect weight much at all. For some people, a modest decrease in calorie intake may hardly budge the scale, because their body will naturally decrease NEAT by a corresponding amount very quickly, in addition to decreases in TEF. For other people, an increase in calorie intake may leave the scale motionless, again, due largely to increases in NEAT and TEF. However, that doesn’t mean that physics is broken; it just means you didn’t account for the changes that occur on the “calories out” side of the equation, and you may need to bulk on a higher calorie intake than you were expecting, and cut on a lower calorie intake than you were expecting. 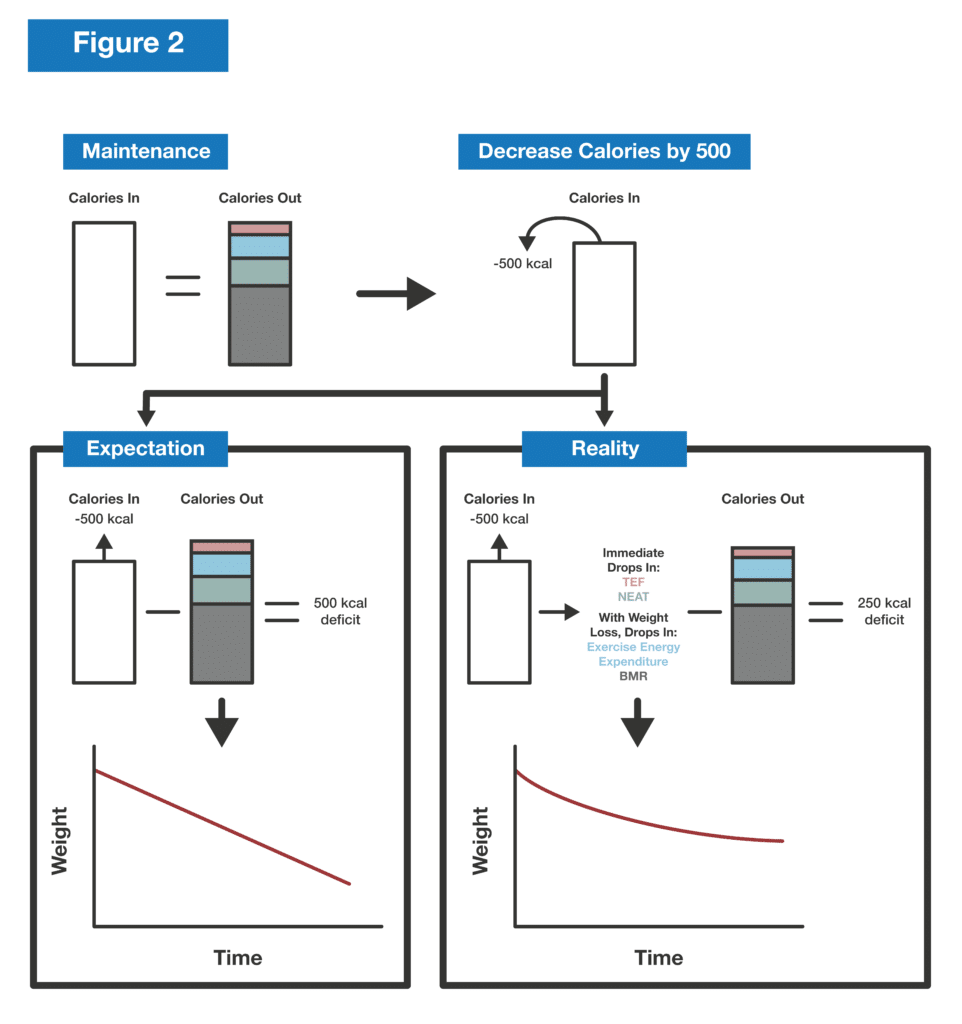 One final factor can throw off predicted changes in weight based on changes in energy intake and expenditure: where that energy is coming from or being stored.

Now, this shouldn’t be too much of a concern for non-beginners and people who aren’t making major mistakes in their approach to dieting (excessive calorie deficit, insufficient protein intake, no resistance training, etc.). However, it may still be a factor worth considering if, for example, you’re resuming training after an injury (presumably you’ll have lost some lean mass from decreased training that will come back pretty rapidly) or you’re in a situation where you have to lose a lot of scale weight quite quickly, requiring a really large energy deficit.

Hopefully these two articles have helped demystify energy balance and weight regulation for you. Part 1 discussed how simple calories and energy balance are conceptually, and hopefully Part 2 has done a good job explaining how those concepts can explain the (at times) unpredictability of weight change in the real world. This knowledge should help you better understand what’s going on when diets don’t go according to plan right off the bat.

Note: This article was first published in Volume 2, Issue 1 of MASS Research Review.