Bench Press Bar Path: How to Fix Your Bar Path for a Bigger Bench

This is a bench press tweak you should know about. Learn how to optimize your bar path for a bigger bench. It makes a bigger difference than you realize. 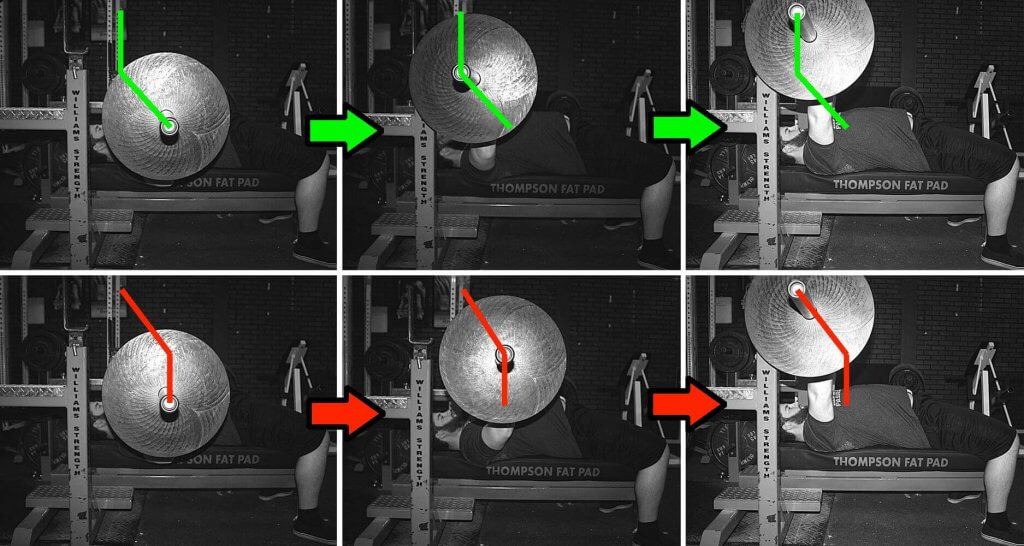 1984 was a great year, for three primary reasons

To this day, McLaughlin’s book is probably the best resource for the bench press in existence.  It’s not without its faults or omissions (it doesn’t even touch on leg drive, for example), and it’s probably a hair too technical for some readers, but I haven’t come across another resource that approaches its combined level of technical analysis and applicability.

It’s a shame that more lifters don’t know of the work that came out of McLaughlin’s lab at Auburn.  From the late ’70s through the ’80s, they published a lot of very good, very applicable studies on powerlifting.  McLaughlin and several of his research partners were nationally ranked powerlifters, and they gathered a lot of their data from the best source imaginable if you want to understand elite powerlifting performance:  high-level powerlifting meets.  In several of their studies, they wouldn’t include a lifter’s data unless the lifter was ranked in the top 10 in his weight class. In one particularly amusing example from a squat study, their “low skill” group included lifters who squatted 620 at 242 and 550 at 193 (their “high skill” group included only national champions).

At its core, the book is based on several studies that compared the bench press technique of world-class benchers to the bench press technique of “novice” benchers (their novices still benched 224 at 170, on average, and would be considered “well-trained” by the standards of a lot of studies) with maximal loads.  Any old-looking picture in this article comes McLaughlin’s books, which you can read spread across 16 parts on everyone’s favorite old-time strength blog (part 1 is here).

It has a lot of interesting insights, but there’s just one that I want to focus on in this article:  bench press bar path.

He found that both the novice benchers and the elite benchers lowered the bar using a similar pattern:  roughly a straight line, arcing out slightly.  However, their bar paths during the press itself differed drastically.  The novice lifters pressed almost straight up initially, with the bar then moving up and back more toward the top half of the lift.  The elite lifters followed the opposite pattern – they initially pressed the bar up and back at the start of the lift, and finished the lift by pressing the bar almost straight up toward the top half of the lift.

The simplest explanation:  This technique decreases total flexion demands at the shoulder with any given grip width.

So we’re left with two functions that are impacted by bar path:  shoulder flexion, and shoulder horizontal flexion.

So, what determines total flexion demands?

As with anything else:  joint moments.  Load x moment arm.

Imagine a plane passing through your shoulder joint that’s parallel to the floor.  Since the barbell’s force is pressing straight down into your hand, draw a line straight down from your hand to the plane.  Then draw a straight line between that intersection point and your shoulder.  That’s your moment arm. 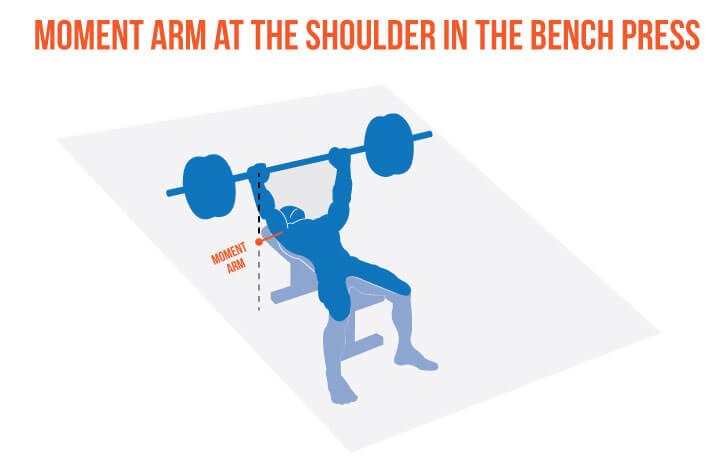 Don’t worry!  That sounds convoluted, but it’s actually pretty simple.  There are two things that change the length of that moment arm:

I think we all realize this when we’re holding the bar at lockout.  It’s a lot easier to hold the bar directly over your shoulders than it is to hold the bar over your sternum or your upper stomach, for example.  The exact same principle applies at every other point in the lift.

Of course, if you wanted to take this principle to its logical extreme, you’d assume that the guillotine press must inherently be the most efficient way to bench press.  Keep the bar directly over your shoulders the whole time, and you’re golden, right?

Touching the bar lower on your chest obviously shortens the range of motion, assuming you get a decent arch.  Not only does this decrease the effort required to complete each rep with a given load, it also keeps you from having to go through extreme ranges of motion that will inherently be weaker.  Regardless of external moments, maximal internal moments – the moments your muscles produce at each joint to move your limbs and extend the bar – drop off rapidly as range of motion increases past a certain point.

Touching low can be overdone too, of course.  If you touch too low, total flexion demands continue increasing, negating any advantage you may have gotten by limiting range of motion.  As with most things, there’s a happy middle.  Anywhere from just below the nipples to about an inch below the xiphoid process of your sternum works best for most people.

Assuming you touch the bar (reasonably) low on your chest/high on your stomach, the next challenge is to actually press the weight back up.

This is where McLaughlin’s research comes into play.

The novice lifters initiated the press by shoving the bar essentially straight up off their chest, with the bar path angled back only slightly.  Since the bar didn’t move back toward their shoulders very much, total flexion demands at the shoulders were still very high (relative to the load they were lifting) when the bar reached the sticking point of the lift a few inches off the chest.

Compare the sticking points (the point where the lifters were applying the smallest amount of force to the bar) of the novice lifters to those of the elite lifters: 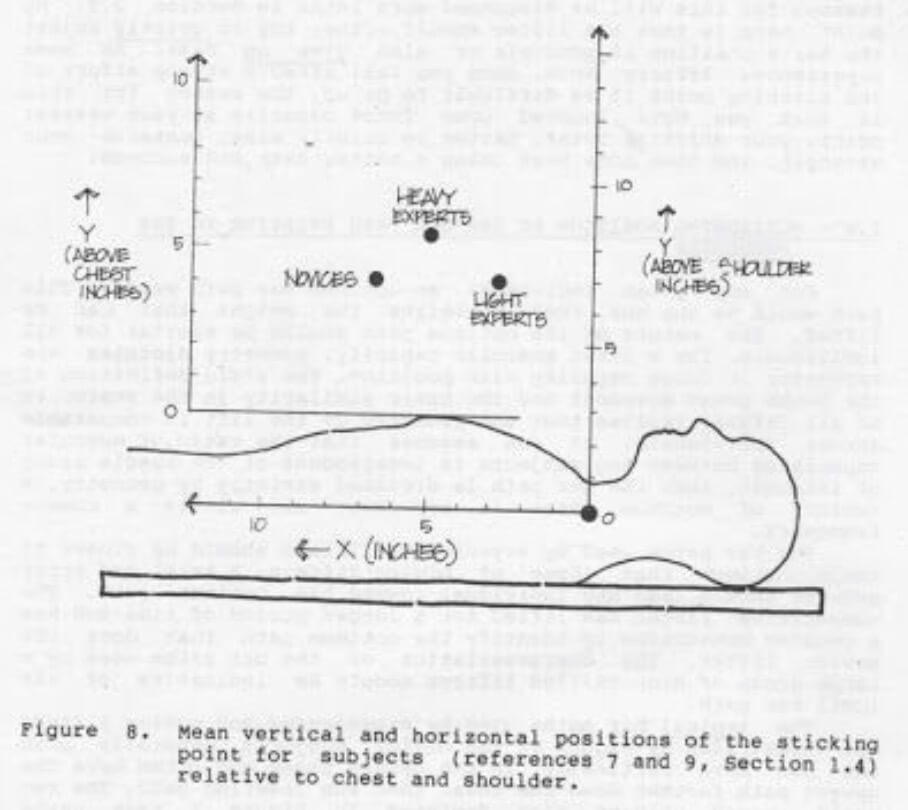 One thing worth noting about this picture:  The “heavy experts” dot is a bit further from the shoulder than it “should” be if this was scaled for body size.  The novices and the light experts were roughly the same height and had torsos roughly the same length, but the heavy experts were taller and had longer torsos, so 5 inches in front of their shoulders would be closer to ~4 inches in front of the shoulders of the other two groups, so for an even more accurate representation, that dot should be moved back toward the head a bit.

Regardless, both groups of experts had much less horizontal distance between the bar and their shoulders than did the novice group.  This helps minimize the total shoulder flexion demands, increasing how much force they could apply to the bar.

So, how large of a payoff can you expect from that technique change?

A pretty big one.

Remember, you don’t miss a lift because you are too weak through the full range of motion.  You miss a lift because you were too weak through the very weakest part of the lift.  For all three groups, their bench maxes were slightly above their minimum force output, which is what you’d expect.  It doesn’t matter if you have “extra” maximum force at some stronger point in the lift – your minimum force at the weakest point in the lift is what will stop you from completing a rep.

That inefficiency primarily came from their bar path.  Their force production dropped off so rapidly because when they reached the position of minimum force – the sticking point – they were in a horrible position to exert force on the bar because the total flexion demands at the shoulder were unnecessarily high.

If we took a myopic view of this information, we’d assume that simply changing the bar path would instantly increase their bench press from 224 to about 270 (about 10-12% less than their maximum force output, bringing them in line with the elite lifters) instantly.

Obviously that never happens in the real world…at least not instantaneously.

As previously mentioned, one thing that McLaughlin noted in his research was that the elite lifters’ maximum force output didn’t change much from year to year, but some continued adding weight to their bench press, while some plateaued.

Here’s the type of change this adjustment can make: 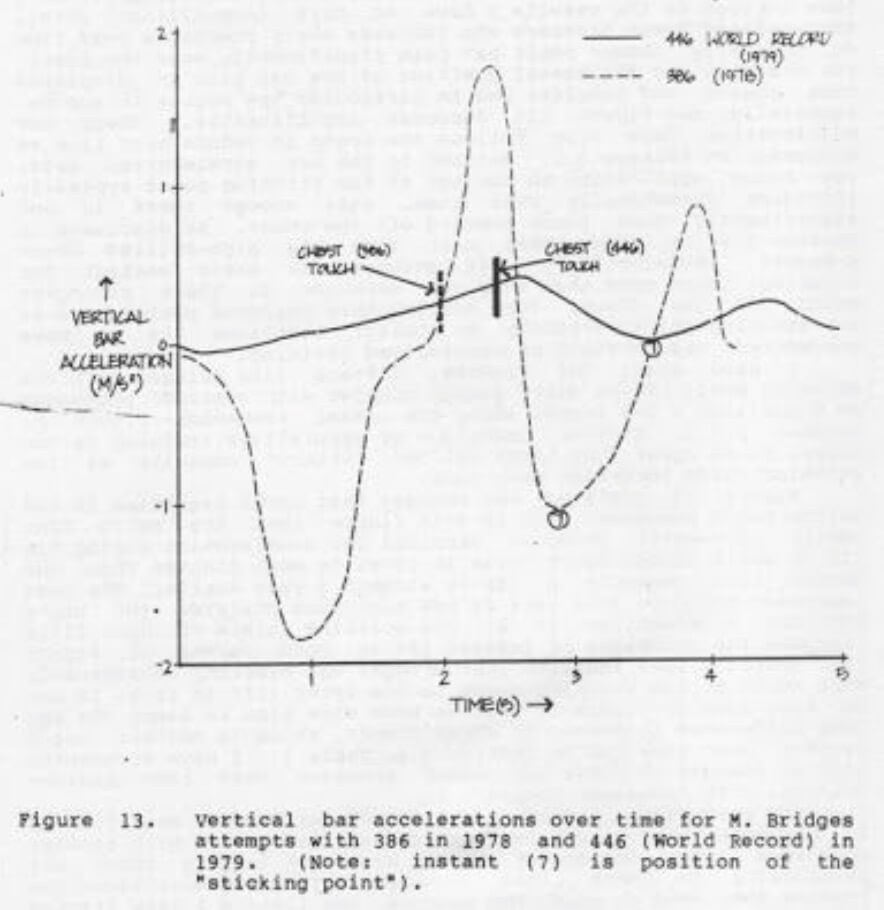 However, it’s worth reiterating that it took Bridges an entire year to transform his technique and take his elite-level bench to world-record levels.  There are two main reasons altering your bar path won’t increase your bench by nearly that much instantly:

However, neither of those things take too long to address, at least on the time scale of an entire training career.  These are both areas where you can see meaningful progress in a matter of weeks or months, not a matter of years (unlike the glacial pace of hypertrophy at the elite levels).

Motor learning is a (relatively) fast process, and developing strength through this slightly different range of motion shouldn’t take too long, because the changes in joint angles and muscular demands aren’t particularly big.

Simply correcting your bar path and benching with this technique should naturally strengthen the pecs more.

Here’s how it looks in practice:

One final question I’m sure someone will ask:  Isn’t the easiest path between two points a straight line?

In this case, no.  Remember, gravity is pulling the bar straight down.  Total work done on the bar is simply defined by the vertical distance you have to move it, not total distance.  If you’re touching the bar to the same place on your chest/stomach, you’re using the same grip width, and your arms aren’t magically getting longer or shorter, total work done on the bar is identical regardless of bar path.

This is a question about how to do that work the most efficiently. 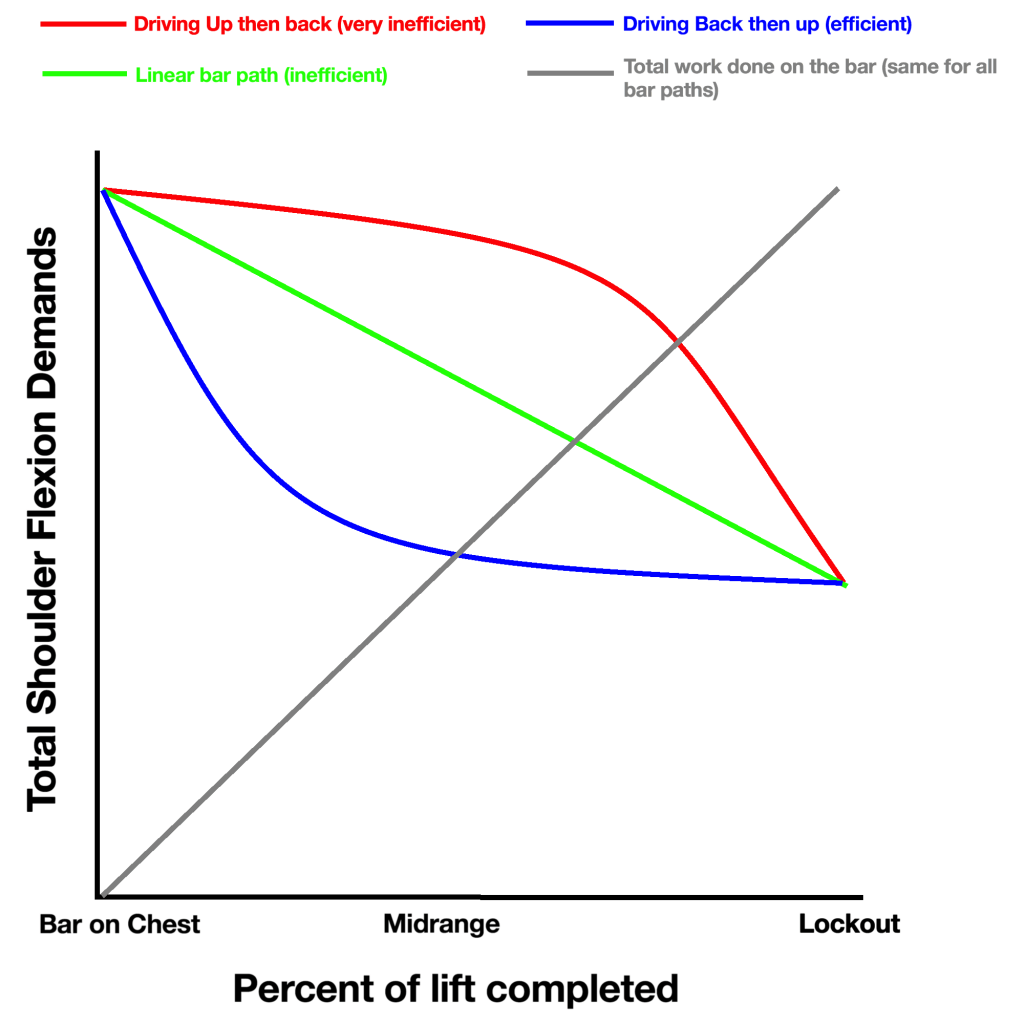 Total work done on the bar is the same regardless of bench press bar path, but driving back and then up is simply the most efficient way to go about producing that work.

So, to wrap things up, here’s what you should do:

If you want to see a great example of how this looks with huge weights in real time, check out this video from Dan Green:

One final technical note:  some very savvy readers may notice that I disregarded horizontal forces on the bar in my analysis.  However, in this case, they don’t change the overall picture because they would be the same regardless of bar path, so addressing them would have just bogged things down without any meaningful payoff.

Greg Nuckols has over a decade of experience under the bar, a BS in Exercise and Sports Science, and a Master's in Exercise Physiology. He’s held 3 all-time world records in powerlifting in the 220 and 242 classes.   He’s trained hundreds of athletes and regular folks, both online and in-person. He’s written for many of the major magazines and websites in the fitness industry, including Men’s Health, Men’s Fitness, Muscle & Fitness, Bodybuilding.com, T-Nation, and Schwarzenegger.com. Furthermore, he’s had the opportunity to work with and learn from numerous record holders, champion athletes, and collegiate and professional strength and conditioning coaches through his previous job as Chief Content Director for Juggernaut Training Systems and current full-time work here on Stronger By Science.   His passions are making complex information easily understandable for athletes, coaches, and fitness enthusiasts, helping people reach their strength and fitness goals, and drinking great beer.   Facebook, Twitter, YouTube
Scroll to Top