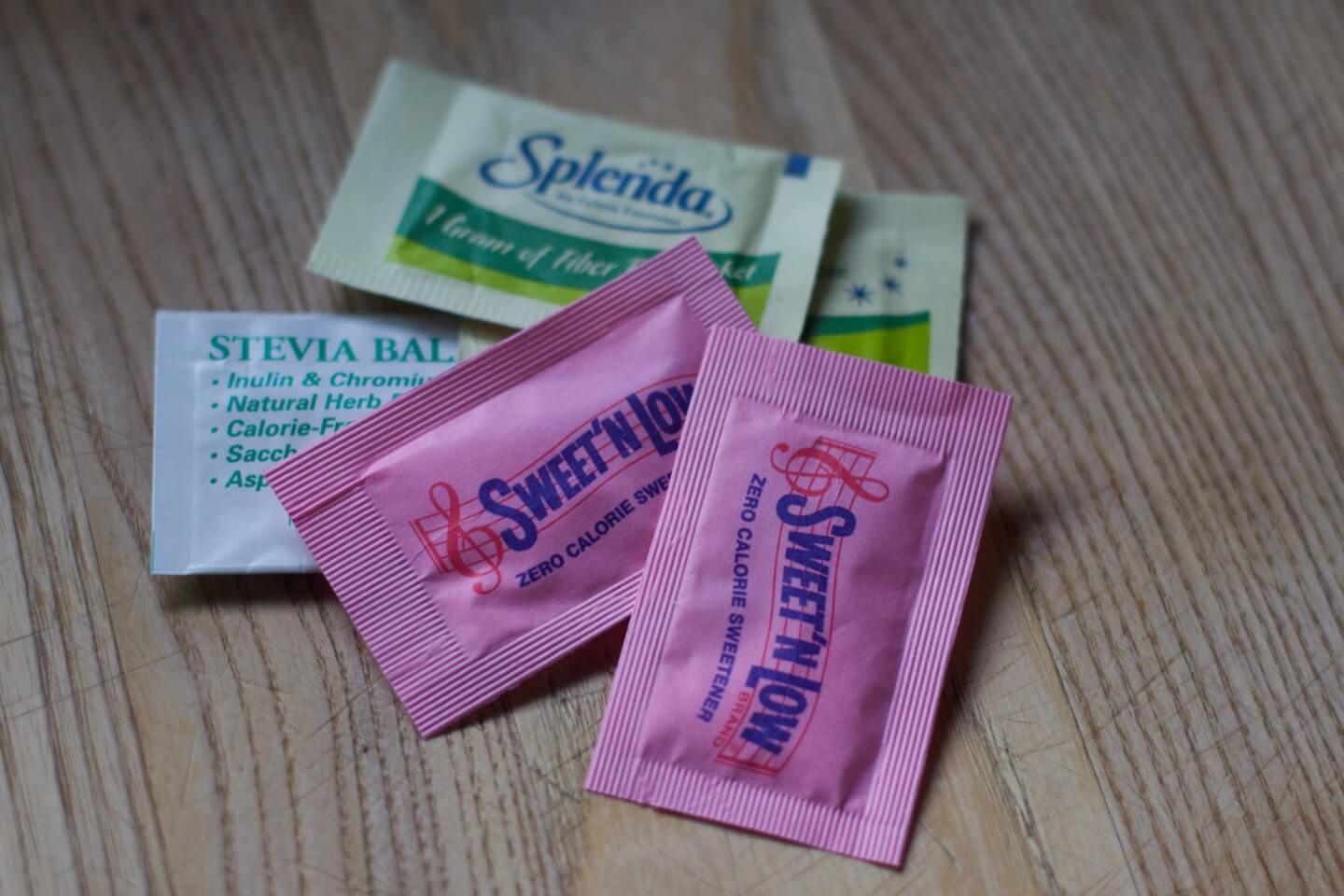 What you’re getting yourself into

Nutrition information is more abundant than ever thanks to the Internet. With a few keystrokes and the click of a mouse, you can find out all you want to know about whatever broad or niche subject your heart desires.

One of the most commonly searched and debated topics in the nutrition world is artificial sweeteners. Artificial sweeteners are highly divisive and are torn apart every few months by the media for being related to cancer, diabetes, or other chronic illness.

No matter how vast the Internet and its information resources may be, many dieters are still unsure if they should be worried about artificial sweeteners, wonder if they’re safe, or have questions about their application in a fat loss diet.

This article will serve to inform the reader of the research regarding artificial sweeteners, especially aspartame, explain how the media distorts certain research to create headlines, and show how they can be highly useful in the context of a fat loss diet.

A primer on artificial sweeteners:

A few of the most commonly known artificial sweeteners include:

These are all used to varying degrees to make things like diet sodas, chewing gum, sugar substitutes, gelatin, lower calorie baked goods, and others.

What is the primary use of artificial sweeteners?

Artificial sweeteners provide a zero calorie alternative to foods or beverages that are traditionally packed with sugar. Most sweeteners are anywhere from 80x – 700x as sweet as sugar, so a smaller quantity can be used to provide the same sweetness.

Artificial sweeteners provide a sweet taste similar to sugar, but none of the calories found in sugar. If someone replaces a higher calorie food or beverage with a zero calorie alternative, not only do they save on calories, they can also start getting more calories from nutritious sources.

Why people worry about artificial sweeteners:

There are two big reasons people tend to worry about artificial sweeteners and their health effects:

Media sensationalism is fairly straightforward. With a 24 hour news cycle, it’s vitally important for media outlets to drum up as much buzz about a topic as possible. This leads to increasingly sensational headlines that take scientific research completely out of context.

Our relationship with food is a bit murkier. Food is a highly emotional subject, and something that we have strong cultural and emotional ties to. Because of this, when food is referred to as an innovation or biotech, we tend to keep our guard up and remain skeptical. It’s not easy for us to accept the fact that our food may be a scientific innovation, at least when it’s referred to as such.

This is the case with GMOs or artificial sweeteners. It’s tough to view these things as real because they are innovations, even though they may be harmless.  People often fall prey to the naturalistic fallacy.

What does the science about artificial sweeteners say?

Aspartame was first approved for human consumption by the FDA in 1974. The FDA also set an accepted daily intake, or ADI, at 50mg/kg of bodyweight. Contrary to popular belief, the ADI of aspartame is surprisingly high. A 150 lb. person would need to drink about 20 regular 12 oz. Coke Zeros in order to place themselves at risk of any health issues.

This is often underreported in the media, though. This is due to the fact that some studies done on rodents have noted an increase in certain types of cancers such as leukemia and lymphoma while aspartame intake was lower than the ADI. Because of these findings, most media headlines have to do with aspartame and its potential as a carcinogen.

These headlines don’t quite tell the full story, and most scientists agree due to the physiological differences between a rat’s and a human’s metabolism. Researchers came to the conclusion that a comparison between rodents and humans is unfair in the case of aspartame.

In 2006, after multiple major media headlines, the FDA once again reviewed all existing data relating to aspartame, its potential as a carcinogen in rodents, and that application in humans. After review, the FDA confirmed their stance that aspartame “based on more than 100 toxicological and clinical studies regarding the sweeteners safety” is safe for human consumption.

In 2013, the European Food and Safety Administration re-evaluated all existing data regarding aspartame and its potential as a carcinogen, and confirmed the stance that aspartame is not a carcinogen.

One of the large knocks against artificial sweeteners recently has been that they might impair glucose tolerance or harm the gut microbiome. A recent study in Nature brought attention to this issue.

In the study, a team at the Weizmann Institute in Israel set up an 11-week trial in which they fed mice three types of water, each containing a 10% solution of different artificial sweeteners: one with aspartame, one with saccharin, and one with sucralose. After 11 weeks, all the mice showed higher fasting glucose levels than mice who had been drinking normal water or water with a 10% glucose solution.

The research team believes this is due to the fact that most artificial sweeteners aren’t digested through the normal GI tract. Instead, they go straight to the intestine, where they can encounter and influence the makeup of our gut bacteria.

Furthermore, the research group noticed a high level of certain types of bacteria that they said had been previously linked to obesity in humans.

These results were also replicated in humans. Seven people who didn’t normally consume sweeteners got the highest safe dose of saccharin possible for seven days, which equals about 10 packets of Sweet’N Low. Four of the subjects had markedly worse glucose tolerance by day five. These four subjects also had different gut bacteria to begin with, and ended up with drastically different gut bacteria.

This isn’t necessarily a smoking gun against sweeteners, though. While three sweeteners were studied, the greatest effects were noticed with saccharin. However, sucralose and aspartame both have evidence linking them to depletion of the gut microflora as well.

Ultimately, the jury is still out until there are larger studies in humans to 1) confirm the findings of a deleterious effect on the gut microbiome in the context of an otherwise healthy diet and 2) establish whether or not those results are clinically relevant (actually influence body composition or metabolic health in any meaningful way), especially with more reasonable doses of artificial sweeteners. It’s important to keep in mind that most of these studies used extremely high doses of artificial sweeteners. While technically in the “safe” limit, very few people consume that level of sweeteners on a daily basis. It’s also important to remember that most of these studies are performed on rats, which have metabolic processes that differ from humans.

Who should use artificial sweeteners?

For the health conscious athlete who needs to drop fat, sweeteners may be a double edged sword.

Very few athletic endeavors allow an athlete to not worry about the amount of body fat they carry.

Physique-focused sports like bodybuilding, or performance-focused sports like powerlifting and weightlifting are perfect examples. In these sports, dropping fat to reach the desired division or weight class is a necessary evil for many competitors. In some situations, the athlete can get by with a drastic weight cut over a short period of time, but many must endure a prolonged diet in which calories and highly palatable foods are limited.

For many of these athletes, using artificial sweeteners can be a double-edged sword, and where they fall might depend entirely on if they’re dieting intuitively or tracking food consumption.

Intuitive dieters may struggle more with artificial sweetener use for a few reasons, but the biggest one seems to be how zero calorie sweeteners affect our satiety. Essentially, food or drinks that are sweet but offer no caloric value only partially activate our food reward pathways.

When our food reward system is only partially satisfied, we’re hardwired to seek out more calories later on. This can be a potential issue for intuitive dieters who aren’t tracking calorie intake because they may unknowingly seek out too many calories, and the more we consume something sweet, the more we will crave it.

A 2007 review of the available evidence shows that most studies report no net change in total calorie intake with artificial sweetener consumption.  Basically, you’ll generally compensate for the calories you save by using artificial sweeteners instead of sugar by consuming slightly more calories later in the day.  This could be a positive in its own right if you’re just trying to maintain weight – fewer calories from sugar-sweetened foods with few vitamins and minerals, instead getting those calories from generally healthier food sources.  However, if you’re purposefully using artificial sweeteners in an effort to lose weight, it would probably be wise to track calorie intake to ensure that you are actually eating fewer calories.

The main reason a dieter may use artificial sweeteners during the course of a diet is to satisfy cravings for food he or she loves without providing a major caloric punch. If the athlete is a dieter who tracks calorie intake, they can still track and fill in the remaining calories with nutrient-dense foods, though they may still increase cravings.

For dieters who track their intake, artificial sweeteners may be particularly useful in limited quantities. However, this is entirely up to the athlete. As the recent explosion of IIFYM and flexible dieting have shown, dieters who are adept at tracking their intake have no issue making treats that aren’t a part of a traditional diet fit within the context of their own diet. If this is the case, some dieters may not need to rely on artificial sweeteners at all.

Finding a definitive relationship between artificial sweeteners and positive body composition changes is a difficult task. There have been recent meta analyses done in which artificial sweetener consumption is associated with lower body fat levels overall.

We don’t have a definitive answer yet, because there haven’t been enough long-term RCTs done to show a causal relationship between artificial sweetener use and weight gain or weight loss.

Success in strength sports, physique sports, or dieting requires an immense amount of effort in many different areas. It requires grueling training sessions, intense diets, and serious mental fortitude. For long-term success, it’s paramount that many of these athletes make things as easy as possible. Artificial sweeteners may provide a way to enjoy the foods you may love at a lower calorie count; they can provide mental freedom, while presenting very little risk for adverse side effects, though their effect on cravings and potentially causing people to consume more food do to the partial activation of the food reward pathway likely varies person to person, and may be more problematic for people who aren’t tracking calorie intake. The choice to use them is entirely up to the dieter, and it seems that if you are going to use them in a diet, a diet that involves tracking food intake would be the best option.

Tanner Baze is a fitness professional based out of Atlanta.