The Sticking Point in the Squat: What Causes It and What To Do About It • Stronger by Science

How do you fix the sticking point in the squat? You don't. Here's what you can do to make sure you're in the best possible position to complete the lift. 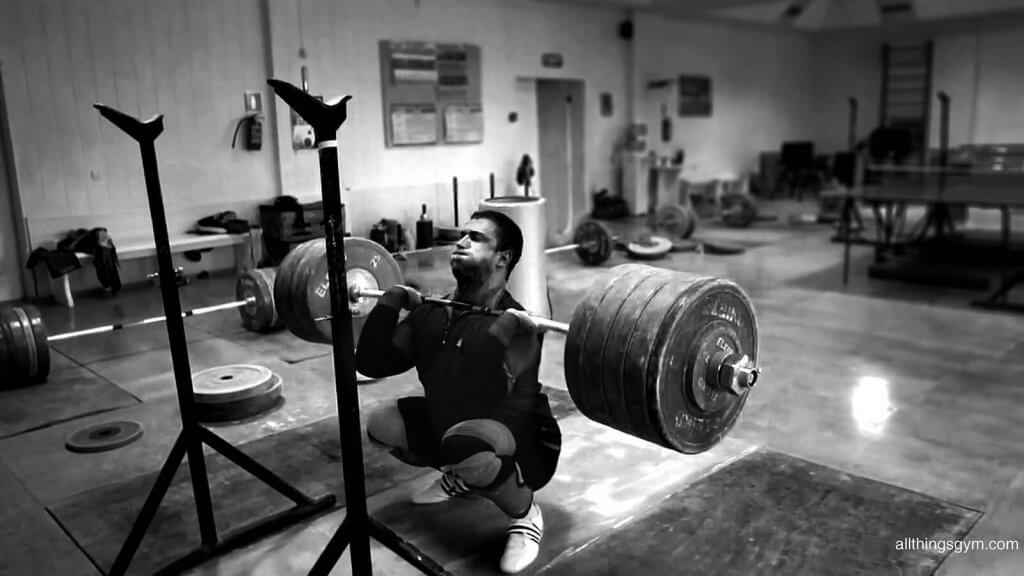 Before we get into this post, I want to let you know about our giant How to Squat guide. It covers everything you need to know about every aspect of the squat – from biomechanics to correcting weaknesses to technique. Click here to open it in a new tab so you can check it out after you’ve finished reading this article.

A chain is only as strong as its weakest link.

So, when you have a sticking point in one of your main lifts, it’s generally a good idea to ask: “What group of muscles is most likely to be limiting my performance though this range of motion?”  For example, if you always miss your bench press at lockout, generally you need to strengthen your triceps so they’ll be strong enough to finish extending your elbows.  Once you strengthen your triceps to ensure lockout isn’t an issue, your bench will generally go up, and the sticking point will generally move to some other point in the lift.

However, sometimes a sticking point is never going to go away.

That’s the case with the squat.  90%+ of people miss the squat just above parallel.  They can get the weight moving out of the hole, but they miss the lift about midway up.

(It probably looks something like this when you miss a squat.)

No matter how much work you do to “fix” that sticking point, it’s probably never going to go away, or migrate to another place in the lift.

That’s just objectively the least advantageous position biomechanically. As you come up out of the hole, hip extension demands don’t change in any meaningful way until you’re above your sticking point. I wrote about this study, which examined the effects of depth and loading on hip, knee, and ankle extension demands in the squat here: Making Sense of Strength. 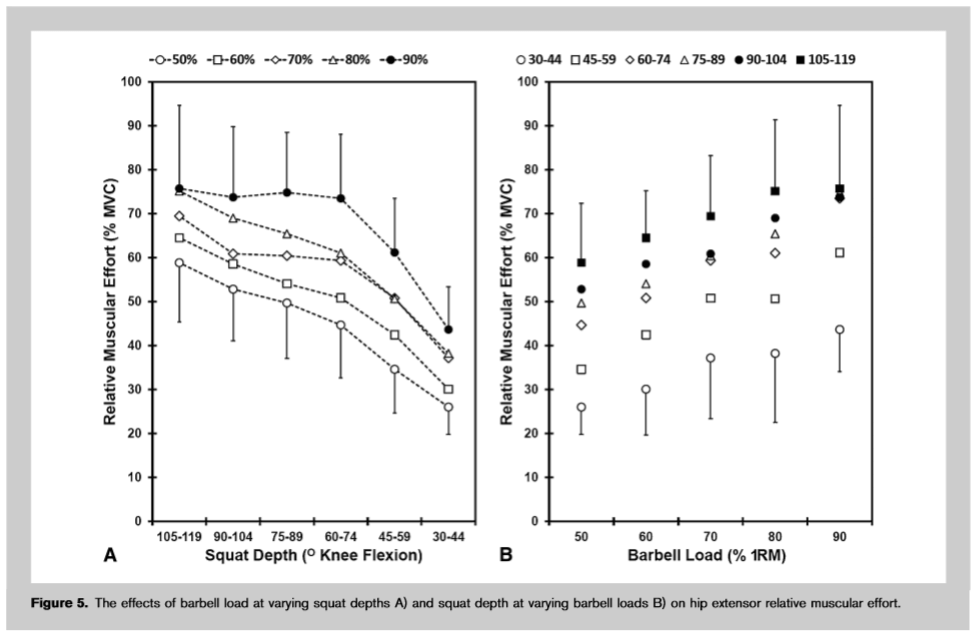 So what does that have to do with anything?  You may remember from that same article that knee extension demands peak at the very bottom of a squat. 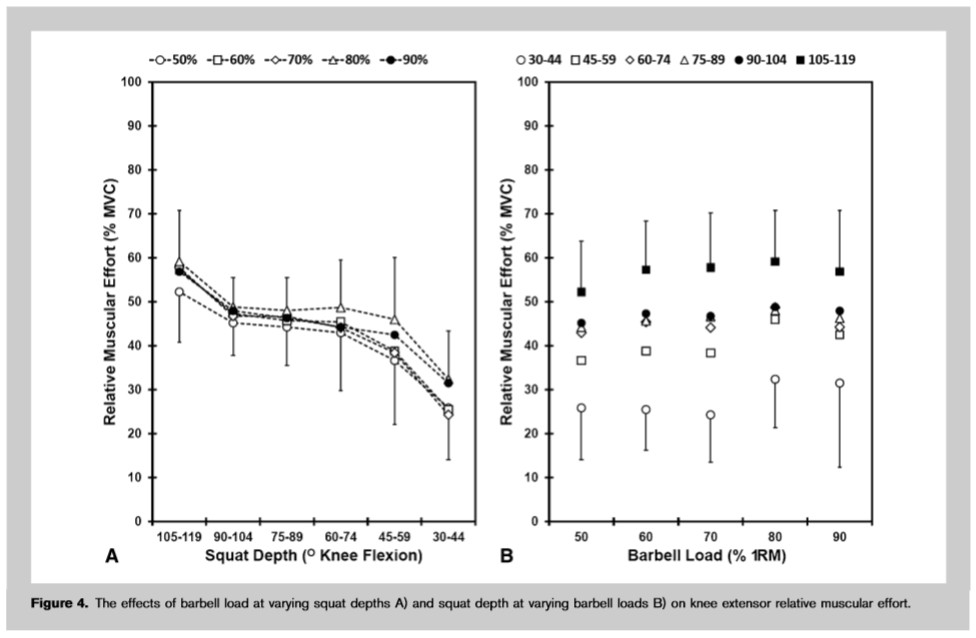 Doesn’t that mean that the bottom position is inherently the weakest position, and that as you come out of the hole, the lift just gets progressively easier on the quads, and stays just as challenging for the hip extensors?

If that were the case, if you could start extending your hips and knees at all (which you can, unless you’re trying to squat a weight way above you max), then you’d always be able to finish the lift.  The common “sticking point” would involve just getting crushed at the bottom of the lift, and a sticking point above parallel would just be some sort of strange aberration.

However, that is, by far, the most common sticking point.  So what’s going on here? 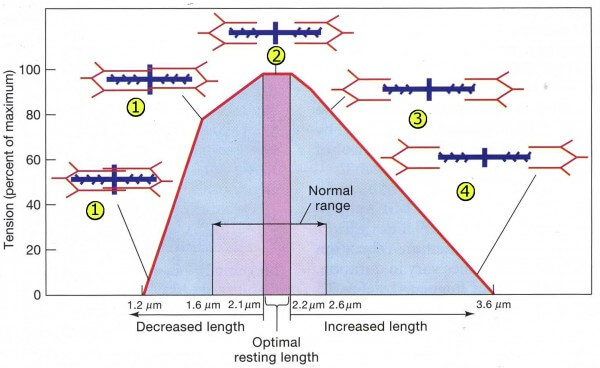 So, when you put those two factors together, the standard length-tension relationship of a muscle looks more like this: 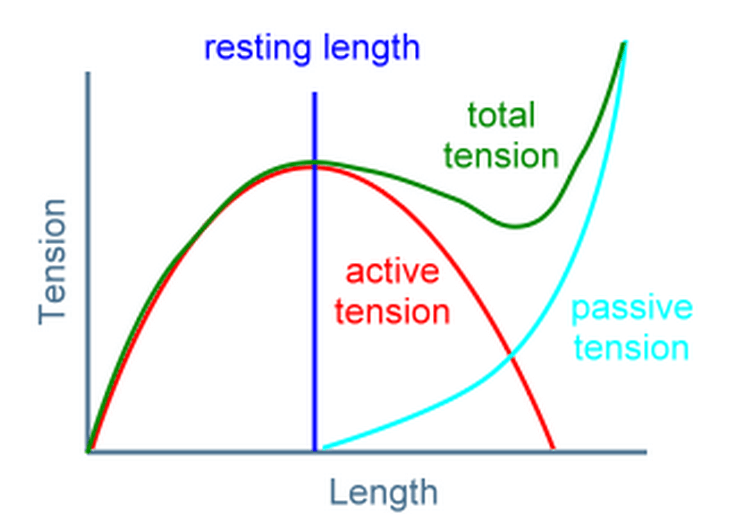 That dip in the green line:  That’s your sticking point.

At the bottom of the squat, hip extension demands are high, but some of your hip extensors (potentially your glutes, probably your adductors, particularly your adductor magnus, and probably not your hamstrings) are in a stretched position, meaning that the total muscular force you can produce is very high.

Once you break through your sticking point, the muscles aren’t as stretched, but they’re getting closer to resting length, so the amount of force they can produce increases again (plus, the extension torque demands decrease anyways).

At the sticking point, however, you’re in that lull – the dip toward the right on the green line above.

So, what can you do about it?

Roughly in increasing order of importance:

4) Focus on developing more speed out of the hole.

The more momentum you can build up before you hit your sticking point, the more likely it’ll be that you can break through it.  Of course, if you’ve been reading Strengtheory for a while, you know that you should already be trying to move every rep as fast as possible

You don’t need to do dedicated “speed work.”  Just try to accelerate the bar as fast as you can on every rep.

Of course, this strategy can only get you but so far.  Obviously with maximal loads, you’re not going to be able to explode out of the hole with a ton of speed (unless you’re Shane Hamman).

Most people are still going to slow down by the time they reach their sticking point; otherwise, it wouldn’t be much of a sticking point, now would it?

That brings us to…

3) Drive your hips under the bar aggressively as you reach your sticking point.

I’ve written about this strategy before, near the end of this article: Squats Are Not Hip-Dominant or Knee-Dominant.

If you can shift your hips forward just a little bit, that can help decrease the hip extension demands just enough that you can break on through your sticking point and complete the lift.

These are two good examples of how this looks in practice:

The second rep here is also a great example. This technique is very popular among weightlifters:

When people try this for the first time, they often have a tendency to shift forward onto their toes.  To counter this tendency, lead out of the hole by driving your traps back into the bar aggressively.

The movement should actually feel a lot like a deadlift.  A deadlift is generally cued “shoulders back” and “hips forward” to keep the hips from drifting back away from the bar. You should drive out of the bottom of a squat with the same intention; instead of thinking about driving the bar up, your main goal coming out of the hole should be to try to “un-fold” yourself by driving your shoulders back into the bar and driving your hips forward back under the bar.  If you’re aggressive enough with driving your shoulders back into the bar, it’ll counter the forward shift of your hips so that the weight stays balanced over the middle of your foot, instead of shifting forward toward your toes.

There’s a lot that has been said about bracing, and it’s a topic that deserves more than a single sub-point.  I’m working on an article that’ll cover this point in much more depth, and that will illustrate just how much effective bracing can improve your strength.  But, for the time being, this video explains it pretty well, these YouTube Channels (Quinn Henoch, Darkside Strength) have a lot of great information about breathing and bracing, and this review article on Dynamic Neuromuscular Stabilization is a good place to start as well.

Remember, this particular sticking point isn’t one you can get rid of.  It’s not indicative of a particular muscular weakness; it’s just mechanically the least favorable position.  Strengthening a particular muscle or muscle group isn’t going to eradicate it.

How do you 'fix' the sticking point in your squat above parallel? You don't. Click To Tweet

So, as usual, this common question has a simple answer.  How do you fix the sticking point in your squat above parallel?  You don’t.  You’re stuck with it forever.  What you CAN do, though, is make sure you’re hitting your sticking point with as much speed as possible, fighting to get your hips back under the bar (very similar to a deadlift), and bracing effectively.  Those three things can help a lot, but at the end of the day, you’ll still be left with the same sticking point because it’s simply the least favorable spot in the lift.  You just need to keep squatting and get stronger.

Want more squat content? Check out How to Squat: The Definitive Guide, a giant, free guide to everything you could ever want to know about the squat.