There are a lot of misconceptions about strength training for women. This article clearly lays out what the research says about male vs. female strength and muscle growth, and the inferences we can draw from those findings.

With that in mind, there are two general camps when it comes to strength training for women:

Both groups, incidentally, tend to be heavy on narrative and light on research.  What I want to do in this article is present the research comparing and contrasting male and female strength training.  My goals with this article are to:

With that out of the way, this article is going to start with a review of the research comparing strength and muscle growth in men and women.  After that, I’ll focus just on the research using participants with prior training experience, and then I’ll review the inferences we can draw from sex differences in strength sports.  At the end, I’ll discuss some other sex differences and female-specific considerations beyond rates of strength gains and muscle growth.

What you're getting yourself into:

1) While men start with more muscle mass and strength, relative strength gains actually tend to be larger in women, at least in the short term. This is especially true for younger women and upper body strength gains.

2) Long-term, relative rates of muscle growth and strength gains are probably roughly equal for men and women, though women may make slightly larger gains, relative to their starting point, across their entire training career.

3) Women are not just "little men."  While relative muscle and strength gains may be similar, there are key differences between men and women that impact training and recovery.

Men are, in the vast majority of cases, both stronger and more muscular than women.  They also gain both strength and muscle mass at a higher absolute rate.  That much is obvious.  However, relative rates of muscle growth and strength gains are, I think, the more interesting comparison since we largely tend to compare our progress to our own starting points.  If a man gets 10% stronger in response to training, can a woman also expect to get 10% stronger after training, or should she instead expect to gain strength at a faster or slower relative rate?

Studies included in the analysis

Another limitation is that, in studies on untrained subjects, we can’t necessarily assume that their backgrounds are identical prior to the start of a study.  In other words, it’s possible that the “untrained” men in these studies had previously undertaken more activities outside the gym that required high levels of muscular exertion than the “untrained” women.  If that were the case, you’d expect women to have faster initial relative strength gains simply from catching up with the male baseline.

Here are the main results from the five studies on trained subjects: 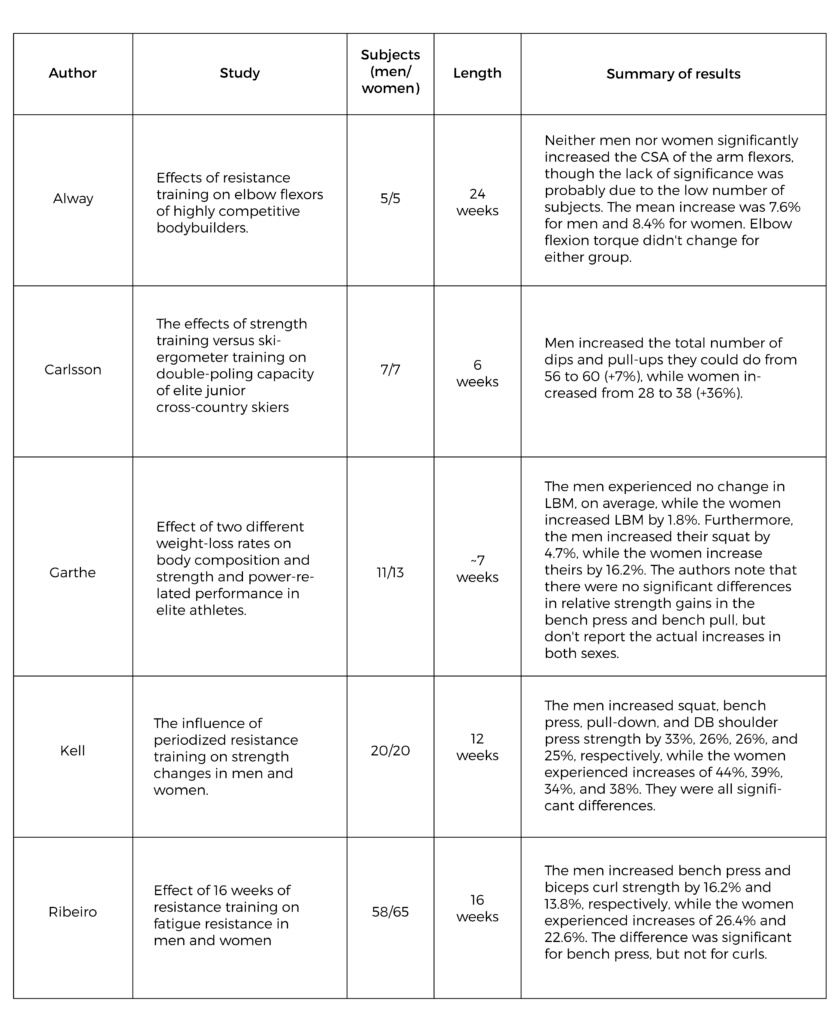 As such, we basically have no good research telling us about rates of muscle growth in trained men and women.  My hunch is that relative rates of muscle growth will continue to be similar, but we’ll have to wait on further research to say for sure.As you can see, only one of these studies (Alway et al.) reported a direct measure of hypertrophy, and only one (Garthe et al.) reported an indirect measure of hypertrophy.  Alway et al. is hampered by a very small sample, while Garthe et al. has a couple other confounding factors – 1) the main purpose of the study was to compare different rates of weight loss, so while the groups with differing rates of weight loss had similar numbers of men and women, it’s possible that group allocation affected results and 2) the study included athletes from many different sporting backgrounds, so while all of them did have prior training experience, it’s possible that the women were somewhat less trained than the men.

With that being said, it’s certainly possible that there were differences in real-world training status that are basically impossible for a study to account for.  For example, if the men tended to train like hardcore powerlifters or bodybuilders, and the women tended to do the sort of lighter, higher-rep “toning” workouts that are often recommended to women, it would make sense that the women would gain strength faster.  In other words, “research tends to indicate that trained women still gain strength quicker than trained men, but I’m concerned those studies are hampered by methodological limitations, so I’ll continue to assume the null (similar relative rates of strength gains) until research on a more representative population is conducted” is also a very defensible position.

The narrowing of the gap as competitiveness increases suggests that women may truly continue gaining strength at a slightly faster relative rate across their training careers.  Similarly, a 2014 study of elite athletes in a variety of sports found that the women had about 85% as much lean body mass as men; before training, women tend to have ~60-70% as much lean body mass as men, suggesting that women may actually gain relatively more muscle than men long-term (though, for all of these comparisons, you can’t assume causation from cross-sectional analyses).

So, just to wrap up this section, here are the big takeaways:

I’m sure there are some people in a state of mild disbelief as this point.  After all, men have more testosterone, and testosterone is anabolic; therefore, men should be at a huge advantage when it comes to building muscle and gaining strength, right?  An implication of this analysis is that, assuming a given woman and a given man start with similar amounts of muscle mass and strength, they’d be likely to gain the same amount of muscle and strength if they both started lifting.  That just doesn’t sit right with some people.

To quote James, “Variations in your blood levels of testosterone impact your ‘base’ level of muscle, but have minimal impact on your relative (%) gains.  Thus, having higher testosterone levels means having a higher base level of muscle.  While the relative gains will be mostly similar, the absolute gains will be higher due to the higher baseline.”

Also note, testosterone isn’t the only relevant sex difference here.  There are sex differences in gene expression, sex differences in other anabolic hormones like IGF-1 (which may play a bigger role in women than men), and, obviously, sex differences in estrogen (which, contrary to popular belief, exerts anabolic effects in muscle tissue).  Testosterone is only one piece of a much larger picture that only gets more confusing and convoluted the more you look at it.  At the end of the day, it’s best to just remember the messiness of physiology and understand that outcomes (similar relative muscle growth and strength gains, supported by heaps of research) trump mechanisms (differences in testosterone levels) every time.

For starters, women tend to be less acutely fatigable than men, meaning they can generally do more reps per set at a given percentage of 1RM, do more sets with a fixed number of reps at a given percentage of 1RM, or both.  There are several factors underpinning this difference, but the two most important seem to be a) women tend to have a higher proportion of type I muscle fibers, which are more fatigue-resistant and b) women tend to have less muscle mass, so they don’t occlude blood vessels quite as quickly when lifting, meaning they can more efficiently deliver oxygen and clear metabolic waste products from their muscles.  (However, I’ll note that this isn’t a unanimous finding).

Second, women may recover from training a bit faster than men (one, two, three).  When I’ve mentioned this in the past, the counterargument I typically hear is that women don’t create as much force, so of course their muscles won’t sustain as much damage, and will therefore recover faster.  However, that doesn’t make much sense when you think about it. For starters, I’m not aware of any evidence showing that people who are stronger or more muscular at baseline experience more muscle damage, more soreness, or larger/longer performance decrements than people who are weaker or less muscular, all else being equal.  More importantly, what each of your muscle fibers “feel” is the tension on that specific fiber; the contractile force of the entire muscle shouldn’t matter, as long as each fiber is being recruited to a similar degree and experiencing a similar amount of tension. I think the more likely explanation is that estrogen may exert a protective effect on muscle, limiting damage and potentially accelerating repair.

I hope you can take something away from this article.  If you’re a woman, I hope it was illuminating and empowering.  If you train women, I hope it was informative. Men and women are more alike than different when it comes to training responses, but similar doesn’t mean identical.  Women are not just smaller versions of men, though they should expect the same relative rate of progress a man would.

If you got something out of this article, I’d really appreciate it if you’d share it with your friends, your gym buddies, and anyone else who you think might benefit.  Since women are so underrepresented in strength training research, I find that this is a topic with so much misinformation swirling around.  I hope this article can serve as a small beacon of sanity.

A new study investigated male and female strength gains and hypertrophy after strength training, and I found another obscure older study that I missed in my initial sweep.

The results of these two studies are in line with the findings of this meta-analysis.