How do factors like age, strength, or sex impact strength gains in competitive powerlifters (not just untrained subjects in a lab setting)? I analyzed the data of almost 20,000 competitors, and these are the results.

A common complaint with the scientific literature on strength training is that there aren’t enough studies on really well-trained or competitive lifters. I ran into that recently when writing an article comparing strength gains in men and women – there were 70+ studies on the subject, but only five that used trained subjects.

That got me thinking, “how could I efficiently gather a ton of data on competitive lifters to compare rates of progress in trained men and women? Or across age groups?” Then I realized I didn’t have to.

If you’ve never heard of Open Powerlifting before, it’s an archive of powerlifting meet results with data stretching all the way back to 1971, with more than 640,000 dated entries. That allows us the ability to do some retrospective longitudinal research on a variety of topics.

So, I downloaded the data (on 6-28-2018) and pared the entire dataset down to lifters who met seven criteria:

From there, I screened out duplicates and then calculated the allometrically scaled total for each lifter to account for people moving into higher or lower weight classes over time.

Then, I calculated rate of strength gains for each lifter over time, using this formula: ((ASS2 – ASS1)/((T2-T1)×ASS1))×30. Multiplying by 30 allows us to use monthly strength gains as our standard of progress. 1

Finally, I ordered rate of progress from highest to lowest and screened the top 1% and bottom 1% of results. I did this so that extreme, unrepresentative results wouldn’t skew the rest of the analyses. For example, if someone had a REALLY abhorrent meet and then competed two weeks later to redeem themselves, this formula may say they gained strength at a rate of 30% per month. Such scenarios are obviously not representative of actual strength gains or losses due to training, so I wanted to trim some of the more extreme results to minimize their impact.

Based on this data, we can look at four different relationships:

I started with sex because if there were any significant sex differences, it would make sense to look at the age and initial strength relationships within each sex instead of in the entire pooled cohort.

That is in keeping with the bulk of the literature on the subject. Of note, in my recent sex meta-analysis, the pooled weekly rate of strength gains was 2.23% per week for men and 2.95% per week for women. The monthly strength gains in powerlifters are 0.576% per month for men and 0.920% per month for women. So, the (mostly untrained) subjects in the scientific literature were making progress 12.8-15.5x faster than powerlifters do.

Since women gained strength significantly faster than men in this sample, I stratified all other analyses by sex.

To simplify the data, I split the data into deciles based on initial strength. Then, I plotted the 10th, 25th, 50th, 75th, and 90th percentile of strength progress within each decile. As you can see, the largest changes are seen among the “high achievers” in the lowest deciles. The 10th, 25th, and 50th percentiles have pretty gentle negative slopes across all deciles, while the 75th and 90th percentiles have a pretty steep drop-off from the first to third deciles.

Finally, as a robustness check for the sex differences, I plotted the difference between female and male relative strength gains in all 10 deciles. As you can see, women tended to make faster relative progress across the board, even in the higher strength deciles (which runs counter to the common claim that women only gain strength faster in the scientific literature because the female subjects included in studies have a lower training status than the male subjects). 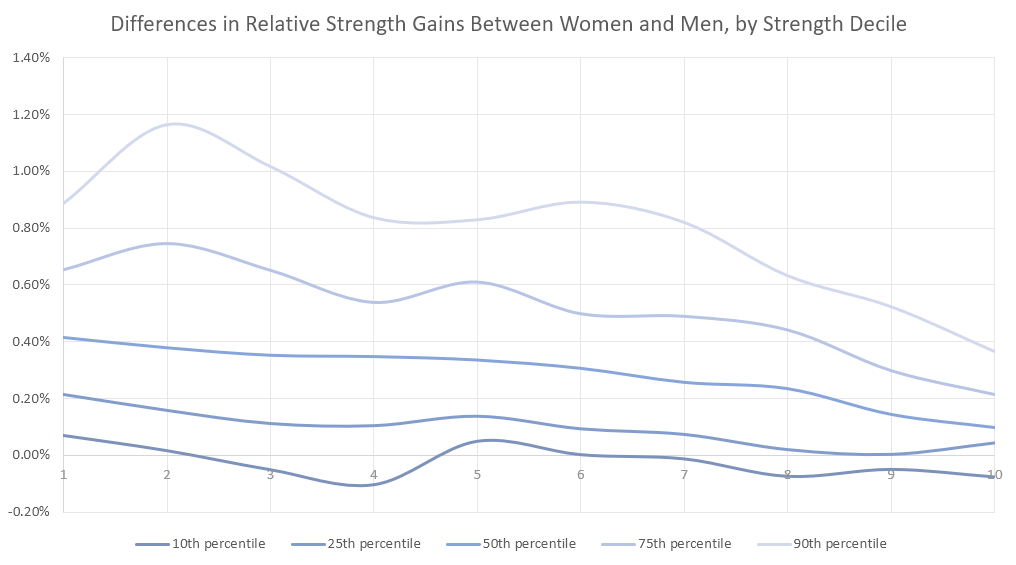 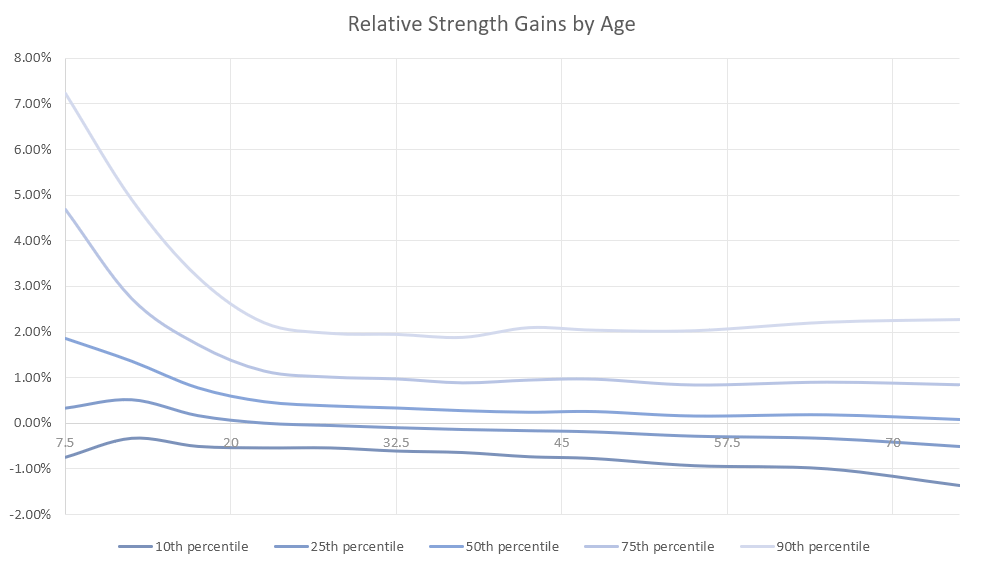 This visual representation of the data really surprised me. There seem to be big differences between people younger than 20 and older than 20, but past that, there don’t seem to be any major differences from 20-80 years old, except that there’s a greater overall spread in rates of progress in the higher age brackets.

Now, I certainly don’t think this means that people keep gaining strength indefinitely. I think it’s probably due to a couple layers of sampling bias; even in the context of powerlifting meets, most lifters are relatively new to the sport (I’d estimate that at most meets, 80% of the competitors have been training seriously for fewer than 5 years, and people who’ve been training for 10+ years are a very small minority), and most lifters probably stop competing as frequently (or stop competing at all) once their strength eventually peaks and then starts regressing. Furthermore, people only compete in powerlifting if they’re drawn to the sport, and only a minority of people in any age group are drawn to the sport in the first place (probably people who, on average, are more gifted for powerlifting than the population average); I’d wager that the average 60-year-old powerlifter is probably a little more atypical (and, all other things being equal, more of an outlier in their age group, relative to the general population) than the average 25-year-old powerlifter.  Also note that the median is gradually trending down over time.

So, on one hand, you shouldn’t interpret this uncritically and come away thinking that a random 25-year-old and a random 60-year-old should expect similar rates of relative progress. On the other hand, it doesn’t appear that the ability to gain strength decreases as precipitously with age as many people assume.

Rolling it all together

So, at the end of the day, how well can we predict the rate of progress given someone’s sex, age, and strength levels?

To find out, I ran a multiple linear regression with all three of these factors as independent variables and with relative increase in allometrically scaled strength as the dependent variable.

Even a model incorporating all three of these factors is only minimally predictive (r = 0.338; r2 = 0.114). This means that these three factors only account for about 11.4% of the variation in strength gains.

These three factors only account for about 11.4% of the variation in strength gains.

Other factors like genetics, training (selecting a good program and executing it well), nutrition, sleep, stress, injuries, training age, and random error account for the other 88.6% of the variation. In other words, it’s foolhardy to make big assumptions about the rate of progress you can expect given your age, sex, or current level of strength. While those things are all related to subsequent rate of strength progress, the relationship is quite weak and not very predictive.

Some of the relationships in this dataset may be weaker than the “true” relationships between any of these factors and subsequent strength progress, simply because competition data naturally have some noise. Things like poor vs. excellent peaking, poor vs. excellent attempt selection, strict vs. lax judging, etc., introduce more noise into the dataset than would be present if the data were collected under perfectly controlled laboratory conditions. Weeding out the outliers helps with this on the margins, but there’s doubtlessly still noise present within the more “normal” data as well. However, the tradeoff is that the people in this dataset are much more well-trained than the people in most studies, and the dataset is WAY bigger than one you could feasibly gather in a prospective study.

With a retrospective analysis like this, sampling bias is important to consider. As mentioned, the people who choose to compete in powerlifting meets are a minority and probably differ from members of the general population in nontrivial, systematic ways. Generalizing these findings to another population would need to be done very cautiously. Furthermore, it’s impossible to control or account for factors such as training age or nutrition that could feasibly affect rates of progress, and it’s reasonable to assume that most people stop competing (or compete less frequently) when their strength progress slows or when their strength starts to decline. Taking all of these things into account, the rates of progress seen in this study probably overstate the “true” rates of progress people actually make.

Finally, if a lifter competed twice, their data would go into these models once (rate of progress between the two time points). However, if a lifter competed six times, their data would go into these models five times (rate of progress between the six time points). So, it’s possible that there’s some bias in these analyses due to the outsized influence of lifters who have competed more times. With this large of a sample, the influence of any individual, even if they competed twenty times, would be minimal, but it’s possible that people who compete more often differ systematically from people who don’t compete as often, which would introduce bias. Using more complex models would help account for that and would possibly reveal stronger relationships by accounting for between-individual variability better.

As a check on some of these shortcomings, I filtered the data down further to 4,312 lifters who had competed in at least five meets. From meet 1 to meet 2, the median rate of progress in this sample was 0.78% per month, which is basically the midpoint between the male and female averages in the full sample. However, from meet 4 to meet 5, the median rate of progress was just 0.26% per month. On average, meet 5 took place about 2 years (770 days) after meet 1 in this sample, showing that rates of progress decrease over time fairly quickly, and that the rates of progress seen in the full sample may have been influenced by lifters who only competed in two or three meets. 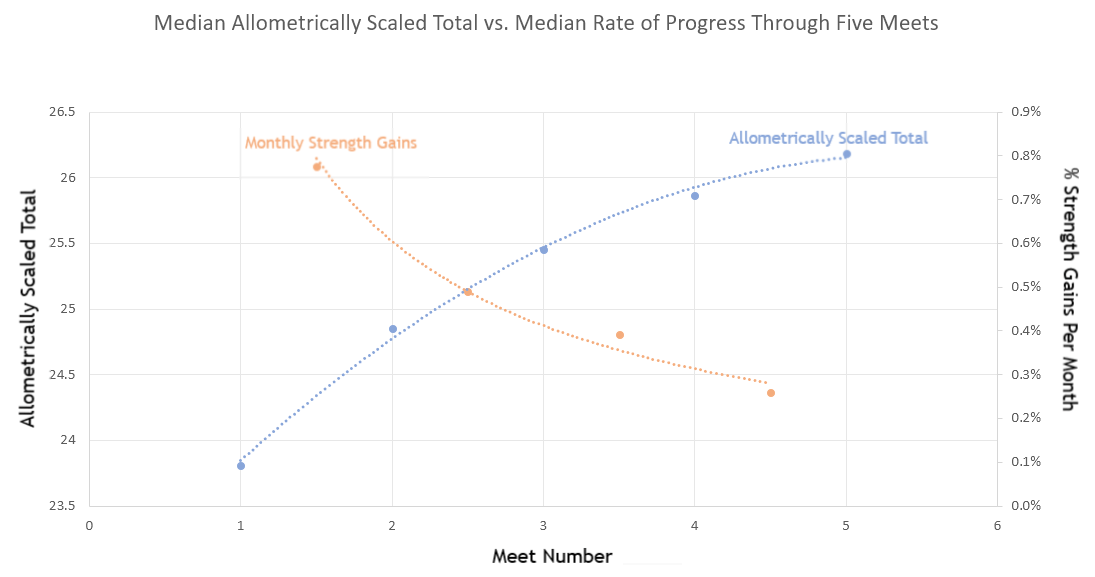 Although, in keeping with the theme of this article, “training age” (defined by the number of meets completed) is barely predictive of rate of progress either. Like everything else, it’s “significant” (p<0.001) because the sample is so large, but the r and r2 values are tiny (0.165 and 0.027, respectively). And, when put into a full model with age, sex, and initial strength, the model’s predictive accuracy is only marginally improved.

In closing, there’s a lot of variability between people, and popular factors people use to predict rate of progress (strength level, age, training age) are associated with rates of progress, but the relationships are much weaker than most people seem to believe. The effect of age seems to be primarily isolated to people younger than ~20 years old, and the effect of initial strength seems to be primarily isolated to the weakest ~20-30% of people. Furthermore, in keeping with the bulk of the literature on the subject, female powerlifters seem to make faster relative strength gains than male powerlifters (though there’s a ton of variability, and the difference is only associated with a small effect size).

The effects of individual variability (i.e. genetics), selecting a good training program (and actually training hard), taking care of business outside the gym (sleeping, eating well, minimizing stress), avoiding injuries, and setting high expectations for yourself seem to vastly outweigh the effects of age, sex, initial strength levels, or even (to a point) training age.

In closing, I’d like to thank Open Powerlifting for maintaining such a great, free database. If you’d like to download the data to poke around, you can do so here. Consider donating to their Patreon to keep their operations up and rolling.