There's finally a study examining the effects of Leangains-style intermittent fasting. We have the results and a study breakdown for you here. 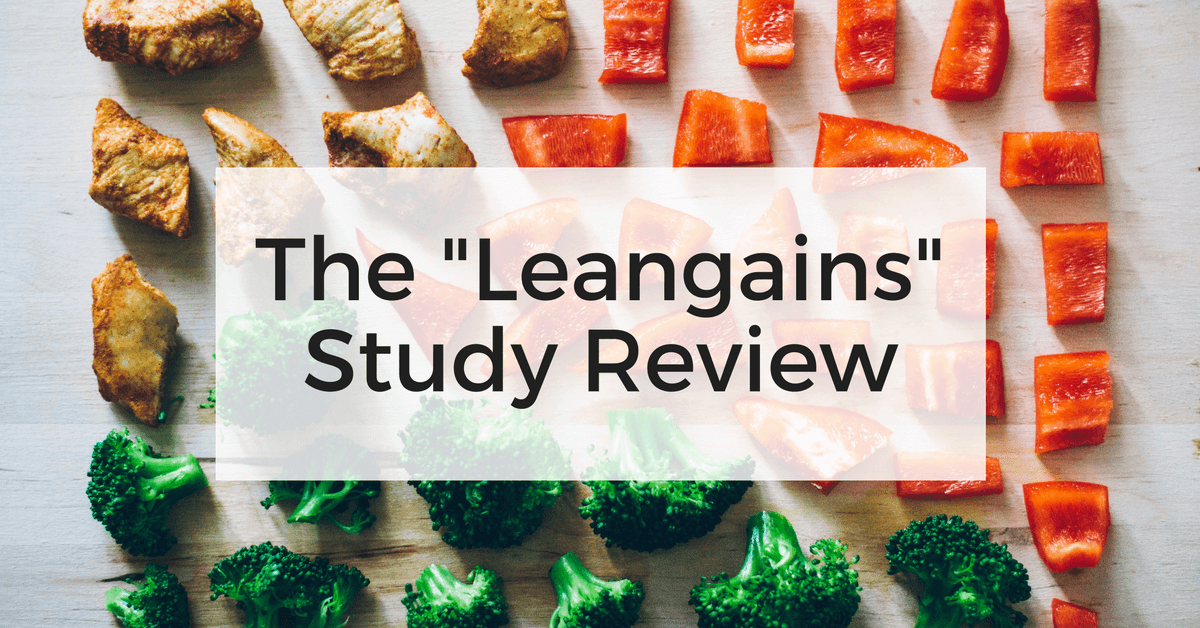 Intermittent fasting (or time-restricted feeding, as it’s typically referred to in the scientific literature) has a long history.  The yearly fluctuations of calorie availability in pre-industrial societies tended to cause (involuntary) periods of fasting; most religions throughout history have practiced some sort of fasting; and today, many Muslims – approximately 20-25% of the world’s populations – forgo all food and water from sunrise to sunset during their holy month of Ramadan.

Until fairly recently, however, few athletes or coaches really gave much thought to intermittent fasting’s applicability for body composition.  Around 2010-2011, interest in intermittent fasting began to increase, remaining strong from 2012 until today.

The name most people automatically associate with intermittent fasting (IF) is Martin Berkhan.  There are other prominent proponents and practitioners of IF, including Brad Pilon, Andy Morgan, Gregory O’Gallagher, Ori Hofmekler (and plenty more), but Berkhan was one of the first to the punch, and it’s his approach to IF – which he’s termed “Leangains” – that has had the most reach and staying power.

The Leangains approach is pretty straightforward: Eat all of your daily calories in an 8-hour window and fast the other 16 hours of the day.  During the fasting window, you can drink zero-calorie beverages (and you can sip some BCAAs around your workout if you have to train in the middle of your fasting window), but restrict anything with any caloric content.  The rest of the specifics of the diet are pretty standard gym advice: high protein, more calories on training days and fewer calories on off days, etc.

Now, you may think about it for a second and realize, “Wait a second.  This just sounds like a glorified way of saying ‘skip breakfast.’ ”

If your feeding window is noon to 8 p.m., you’re essentially just skipping breakfast, eating lunch, tucking in another meal as you’re getting out of work/school, and then eating a late dinner.  That’s really all there is to it. (You can check out the Leangains guide to see how to make the general setup work for your schedule, but really, you can sum it all up with “just skip breakfast.”)

Even though there’s nothing all that exotic about Berkhan’s approach to intermittent fasting, proponents and naysayers both have some very strong opinions about it. Some people say that you’d lose all your muscle by not eating more frequently, and some people say it was a nigh-magical fat-loss “hack.”

Over time, however, most people seem to have gravitated toward a middle-of-the-road position:  IF may be great for some people if it helps them adhere to a diet, but the effects of meal frequency and timing are going to have, at best, a very tiny effect for most people when compared to the effects of total calorie and protein intake.

Until recently, however, there weren’t any studies that investigated Intermittent Fasting, in the way it’s typically practiced, in a group of people who actually lift weights.

The first such study was finally published a couple of days ago.

The participants were mostly in their late 20s or early 30s, and they all had at least 5 years of training experience.

They recorded their habitual calorie and macronutrient intake at the start of the study and were instructed to maintain those dietary patterns throughout the study in an effort to keep them at caloric maintenance.  There were no significant differences between groups, and calorie/macro intake didn’t change significantly for either group throughout the study.  You’ll see that at 1.8-1.9g of protein per kg of bodyweight, both groups had adequate protein intake for hard training.

The study lasted for 8 weeks.  At the end of the study, these were the body composition and strength results (in the table below, ND stands for “normal diet”):

As you can see, the only significant effect observed was for fat mass (FM), where the IF group lost about 1.6kg (about 3.5lbs) of fat versus a nonsignificant loss in the ND group.  All that means is that the IF group was in a slight deficit, which isn’t too surprising.  Losing 1.6kg of fat in 8 weeks would require roughly a 200kcal/day deficit, and if you look at the first table above, the IF group was eating about 200kcal/day less than the ND group; they were likely eating a bit below maintenance at the start of the study, and maintained that slight deficit throughout.

I’ll note that the authors of the study propose that the decrease in fat mass in the IF group was likely due to the effects of the hormone adiponectin (which increased in the IF group but not the ND group), which may act in the brain to increase energy expenditure. That may be true, and if it is, that would be a real physiological advantage to IF. But I still think the difference in calorie intake is the more likely explanation, especially since there was no preliminary period to ensure all of the subjects were in neutral energy balance before the start of the intervention.

Everything else relating to strength and body composition was basically identical between the groups.

However, there were some interesting metabolic and hormonal effects of IF.

On the whole, this study makes it seem that IF “tricks” your body into thinking you’re dieting, even if you’re at (or at least close to) caloric maintenance, in a manner that’s generally consistent with improved health and longevity.

There were no significant or meaningful changes in any of the hormones or biomarkers assessed in the ND group, and neither group experienced a change in basal metabolic rate.

Quick Note: If you’re interested in dialing in your nutrition, check out our app MacroFactor. You can create a custom macro program, easily and accurately track your food, and stay on track with the app’s smart weekly macro adjustments. Learn more and try MacroFactor for free here.

Here’s the Big Picture of This Study…

If you’re just a bro who’s training to look good and lift heavy stuff, this study lends support to the idea that IF is neither harmful nor a “hack.”  Neither group had a meaningful change in lean mass, muscle thicknesses, or strength.  The IF group lost a bit of fat, but the most plausible explanation is simply that they were in a slight deficit.  If the IF eating pattern fits into your schedule best, then it’s a viable strategy for you.  If you prefer eating breakfast, and that helps with your dietary adherence, there’s probably not a good reason for you to go with IF.

However, this study does provide some evidence that IF may be more beneficial for your health than a traditional meal pattern.  This isn’t a point I’m going to harp on; I’m not a doctor, so it’s not my place.  But for the most part, the changes in the IF group’s blood work are consistent with improved metabolic health and lower chronic disease risk.  This isn’t all that surprising, since various time-restricted feeding and fasting approaches have been shown to have health-promoting effects in previous research (in addition to or independent of calorie restriction and weight loss); however, most of the previous work was on overweight and sedentary populations, so it’s cool to see similar effects in active, young, healthy-weight people.  A lot of that research is linked in the full text of the study at hand if you’re interested in checking it out.

Regarding the health-promoting effects of IF, I largely agree with the conclusion of a review published last year:

“Clinical research studies of fasting with robust designs and high levels of clinical evidence are sparse in the literature. Whereas the few randomized controlled trials and observational clinical outcomes studies support the existence of a health benefit from fasting, substantial further research in humans is needed before the use of fasting as a health intervention can be recommended.”

There are a couple of drawbacks to this study that are worth mentioning:

For more reading, I’d strongly suggest this article from Dr. Bojan Kostevski.  It’s a few years old now, but it’s still the best literature review on IF that I’ve come across.

Greg Nuckols has over a decade of experience under the bar, a BS in Exercise and Sports Science, and a Master's in Exercise Physiology. He’s held 3 all-time world records in powerlifting in the 220 and 242 classes.   He’s trained hundreds of athletes and regular folks, both online and in-person. He’s written for many of the major magazines and websites in the fitness industry, including Men’s Health, Men’s Fitness, Muscle & Fitness, Bodybuilding.com, T-Nation, and Schwarzenegger.com. Furthermore, he’s had the opportunity to work with and learn from numerous record holders, champion athletes, and collegiate and professional strength and conditioning coaches through his previous job as Chief Content Director for Juggernaut Training Systems and current full-time work here on Stronger By Science.   His passions are making complex information easily understandable for athletes, coaches, and fitness enthusiasts, helping people reach their strength and fitness goals, and drinking great beer.   Facebook, Twitter, YouTube

61 thoughts on “The “Leangains” Intermittent Fasting Study Is Finally Here”