Few things are more annoying than injuries.  Your training is going well, then all of a sudden you’re laid up rehabbing some sort of sprain or strain for a few weeks or months.

Avoiding injuries while still training hard is a major key for consistent progress in the gym.  But before you can know how to avoid injuries, you have to know why they happen in the first place.

This article addresses why one major class of injuries – muscle strains – happen in the first place.

Muscle injuries are classified as either direct or indirect.  Direct injuries include things like bruises or gashes that occur as a result of some external force assaulting the muscle.  Indirect injuries are those caused by muscle contraction itself, including functional disorders (like DOMS) and structural disorders (muscle fiber tears).

A muscle strain is an indirect, structural injury.  They’re often referred to as “pulled” or “tweaked” muscles.

Strains come in varying degrees of severity, including “partial” (a few torn fibers), “subtotal” (a bunch of torn fibers, with some remaining intact), and “complete” (the entire muscle is ripped in two) [1].

So, how common are injuries from strength training?

Acute muscle injuries rank as the most frequent type of trauma for athletes, accounting for a whopping one-fifth of all injuries. Of these injuries, acute muscle strains are among the most common [2,4].

Despite advancements in the scientific, medical, and athletic communities, incidence of injury has remained largely unchanged over the last 30 years.

Anatomy of the Muscle-tendon Unit

Human skeletal muscle consists of hundreds or even thousands of muscle fibers, nerve fibers, and blood vessels and accounts for approximately 40% of body mass [1]. Multiple layers of connective tissue wrappings encase these structures. Muscles produce movement of the skeleton via attachments directly on bone or via tendinous insertion [9]. 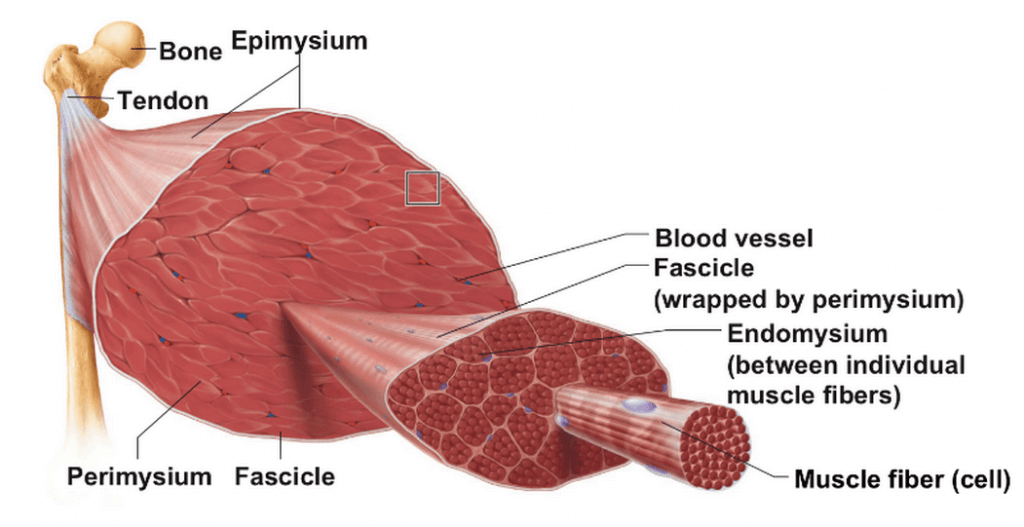 Whiting and Zernicke explain the role of skeletal muscle best:

Skeletal muscles are the engines that provide the human body with the power needed to move. They have a unique ability among all the body’s tissues to generate force and contract. Their specialized cells allow muscle to produce force (sometimes referred to as tension, or tensile load) and change their shape by contracting, or shortening. [10]

This process of contraction and force production is described by sliding filament theory. The smallest contractile unit of a muscle fiber is the sarcomere, which is composed of proteins that pull against each other, pulling the ends of the sarcomere closer together [9].  When that happens in a bunch of sarcomeres down the length of the entire muscle, voila!  Muscle contraction.

Diagram of a sarcomere [9]

How much force a muscle can produce depends on two things:  the contractile proteins themselves, and the connective tissues in the muscle and tendon that add force via elastic properties. This arrangement can be illustrated by the Hill muscle model [11]. 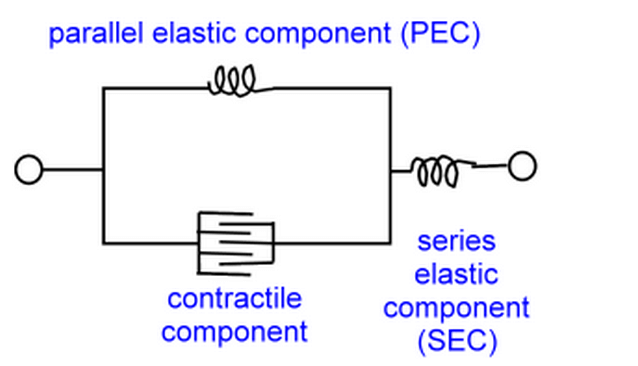 In tissue mechanics, stress is a measure of the internal resistance a muscle develops in response to an applied load. Strain reflects the change in length caused by the imposed load. A muscle’s susceptibility to strain injury is determined by its mechanical response to loading. This response is modeled by a stress-strain curve. The slope of the curve represents the tissue’s stiffness, or tendency to resist length change. The area under the curve represents the strain energy stored by the tissue [10].

Strain energy is the key determinant of injury. 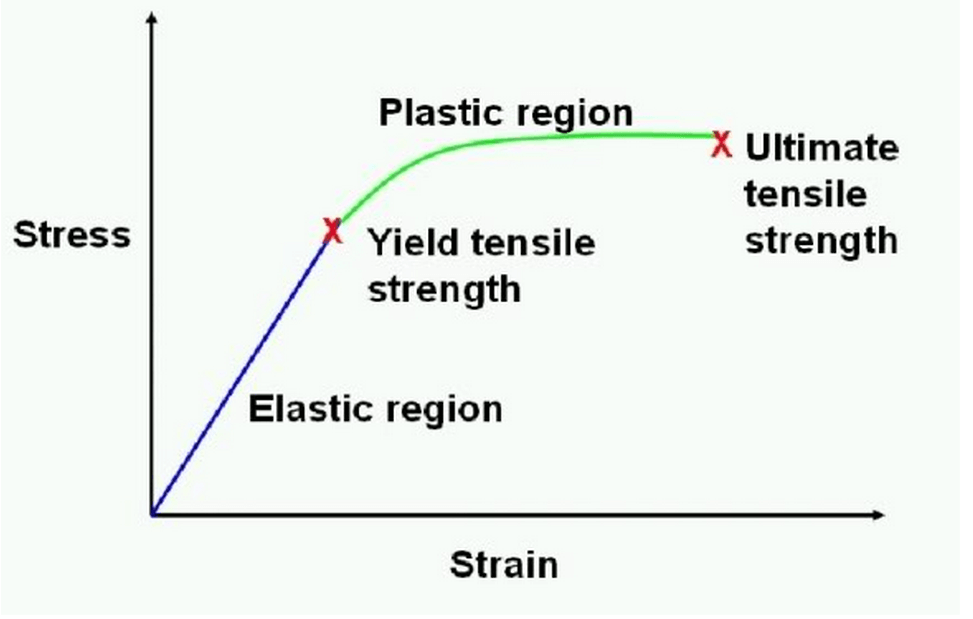 The stress-strain behavior of muscle begins to change as the load increases. When stress exceeds the yield point, muscle enters the plastic region. In this region, strain no longer increases linearly. Here, a small amount of additional stress results in a large strain. Unlike a rubber band, even when the stress is removed, the muscle does not return to its original length, but rather remains permanently deformed. Clinically, this deformation represents a partial muscle tear.

At the extreme end of the curve, where ultimate tensile strength is reached, the muscle can no longer withstand the stress and strain. At this point, mechanical failure – a complete tear of the muscle – occurs [10]. A muscle will completely tear at somewhere around 158% and 165% of its resting length [14].

A material’s mechanical response to loading depends on the characteristics of the material it’s made of. Muscle’s stress-strain behavior is due in part to its fluid composition, which makes it viscoelastic. That is, in conjunction with elasticity, muscle also has the property of viscosity, or resistance to motion (like molasses).

Viscoelasticity is responsible for muscle’s plasticity and also results in an important protective mechanism: strain-rate dependence. As the speed of application of loading increases, stiffness also increases, and the tissue is able to absorb more strain energy [10]. 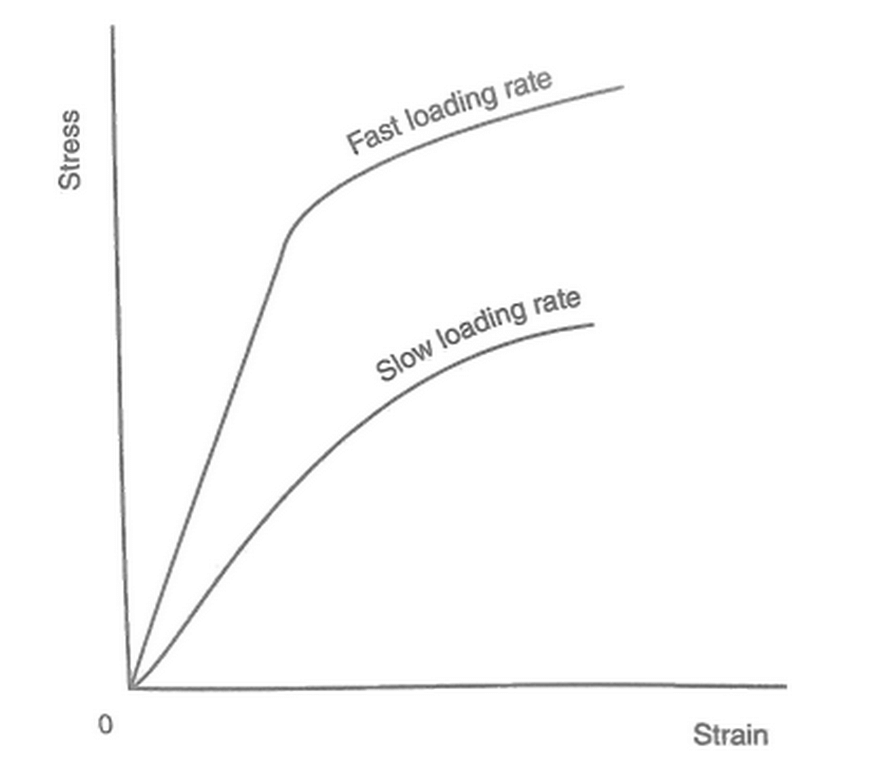 Of course, as discussed in the previous section, muscle is not simply a passive system. In fact, muscle is unique because it can be almost as compliant as skin when passive and almost as stiff as bone when contracting [10]. Thus, the true stress-strain behavior of muscle depends on the degree of muscle activation as well as time course of application of load, as per its strain-rate dependence. 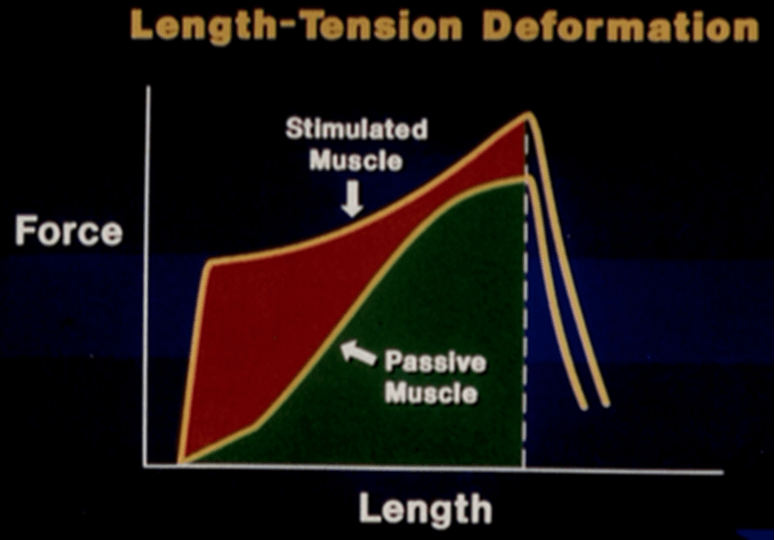 Two classic studies of animal muscles found increases in ultimate stress and strain energy at failure in stimulated muscle compared to non-stimulated muscle [15,16], likely due to increased cross-bridge formation [17]. No difference was observed in the ultimate strain (the amount of lengthening before failure) [10]. These findings suggest that regardless of activation, muscle will fail at the same ultimate length. However, it takes more energy to injure active muscle.

Although the cause of acute muscle strains is often complex and multifactorial, most strains in strength training do share several common features. They generally occur:

Because strain injuries are a function of the total strain energy absorbed, they do not always occur at a muscle’s end range of motion [12]. 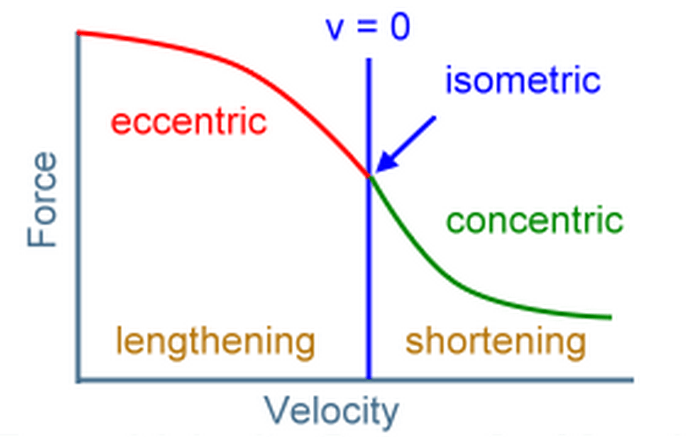 Force-velocity curve of a muscle

The precise location of a tear is a function of the distribution of stress throughout the tissue, but it’s most likely to happen near the junction between the muscle and tendon, because the transitional tissue is a bit weaker than either the muscle or tendon [10, 16].

The muscles most susceptible to strain injury include the hamstrings, quadriceps, hip adductors, hip flexors, abdominals, calves, and biceps [19]. Pec tears are on the rise as well, likely because men are increasingly getting in touch with their inner bench bro [1]. Unsurprisingly, pec major tears seem to occur almost exclusively in men [20]. 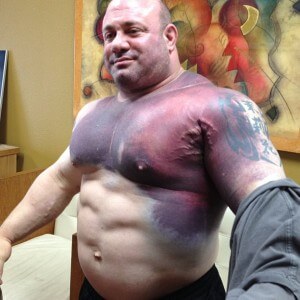 If you have a complete muscle tear, you’ll know it.  A telltale sign of a complete tear is an audible pop, along with a tearing sensation. Generally, this is accompanied by immediate loss of function and intense pain, along with some pretty gnarly swelling and bruising that peak the day after the tear [19]. In the case of a complete tear, a pronounced “Popeye” deformity often happens as well. 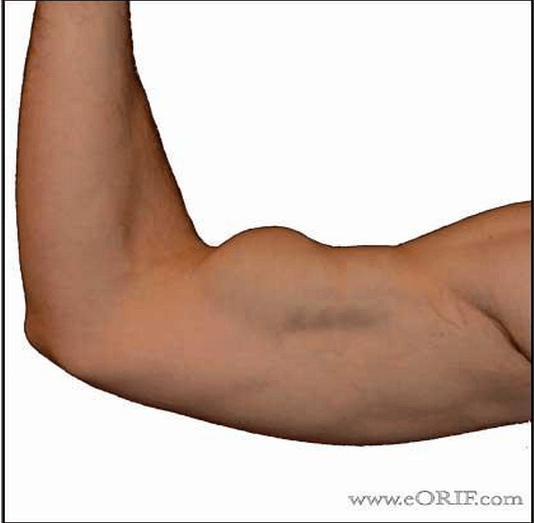 Once the inflammation goes down, scar tissue replaces injured muscle fibers. In the case of a mild partial tear, the scar is small, and surrounding muscle fibers can hypertrophy with no resulting functional deficit [19]. However, severe tears can result in the formation of dense, inelastic scar tissue that impairs muscle function to the point of contracture and chronic pain. Severe strains that prove resistant to conservative therapy often require surgical intervention. Training while injured or without proper rehabilitation can result in re-injury or increased severity of injury, as well as long-term recurrent muscle strains [1]. 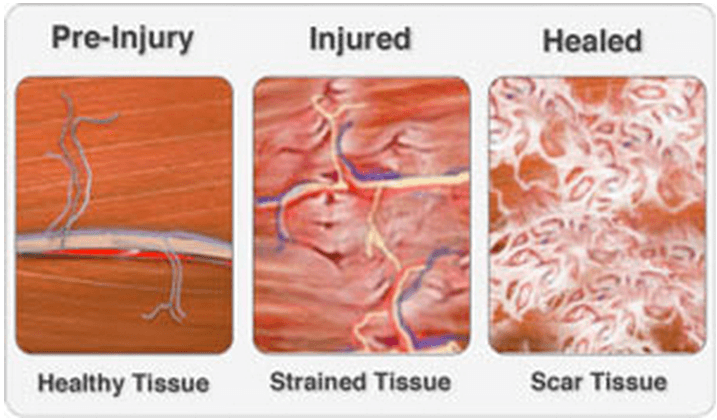 There are several factors that predispose muscles to strain injury. The strongest predictor of injury is history of previous muscle injury [13]. Scar tissue is weaker and less elastic than the surrounding tissue, making it the weakest link in the musculotendinous unit and thus most susceptible to injury.

Fatigue, both of the muscle as well as the central nervous system, also plays an important role in strain injury. Continued loading of a fatiguing muscle will result in eventual mechanical failure, just like any other material [10]. With fatigue, elasticity of the muscle and tendon decrease, reducing the amount of strain energy they can absorb [17]. Fatigue of the central nervous system even further predisposes strength trainees to injury due to its interference with proper movement patterns [12].

Other things that contribute to muscle strains include poor stability and muscle imbalance [1], as well as previous immobilization, weakness, cold temperatures [19], and unexpected cool-down [17].  All of these things tend to reduce muscle’s contractile capability and, consequently, its ability to absorb strain energy. Finally, it stands to reason that inflexibility would increase the risk of injury [21,22], although the evidence on this point is mixed and likely task-specific [23]. 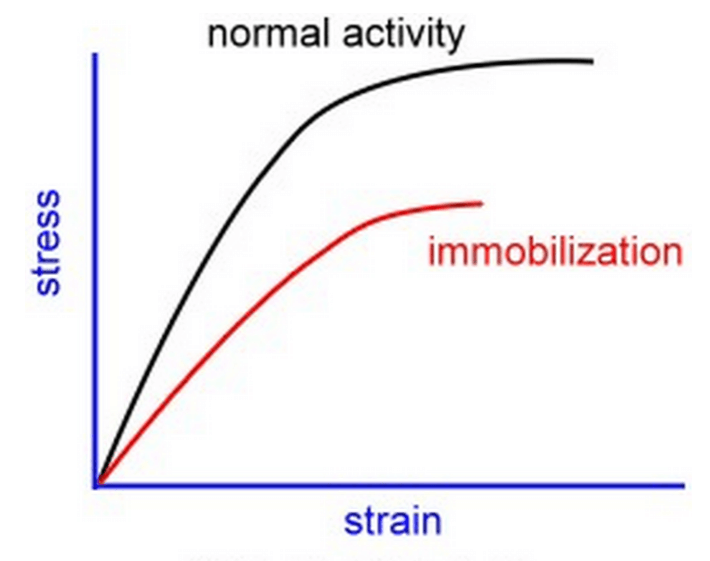 Because muscle strain injuries often occur at the musculotendinous junction, tendon strength is another key determinant of injury risk. The degeneration of a tendon’s collagen fibers occurs both with age [19] and systemic illness such as diabetes and rheumatoid arthritis [1]. The use of anabolic steroids has also been reported to cause tendon weakness, though not always [24,25]. It may be that steroid use increases muscle strength faster than the tendon can adapt, resulting in comparative weakness [26].

So, how do you reduce your risk of muscle strains?  By fighting against all of the factors mentioned above that reduce the amount of strain energy a muscle can absorb!

So, what does that entail?

An adequate warm-up prior to training consisting of stretching and low-intensity aerobic activity can serve to increase range of motion, muscle temperature, and elasticity, which results in increased force production and strain energy absorption [17]. The ability of acute stretching for general injury prevention has largely been disproven. However, it has been shown to reduce the incidence of muscle strain injuries. To reduce the risk of stretching-related performance decrements, follow static stretching with dynamic stretching [27].

During your workout, you need to focus on lifting with proper technique (duh) [12,28]. You also need to be sure you’re doing enough warm-up sets prior to your work sets (duh) [29]. Other things that help include not going too crazy with loading or training volume, and resting long enough between sets (long enough that your breathing slows back down, but not long enough to get cold) [12, 18].  Potential gains in performance must always be weighed against the possibility of an interruption in training due to injury [30].

From a long-term standpoint, injury reduction strategies parallel many of the same basic tenets of general performance enhancement. These strategies include: 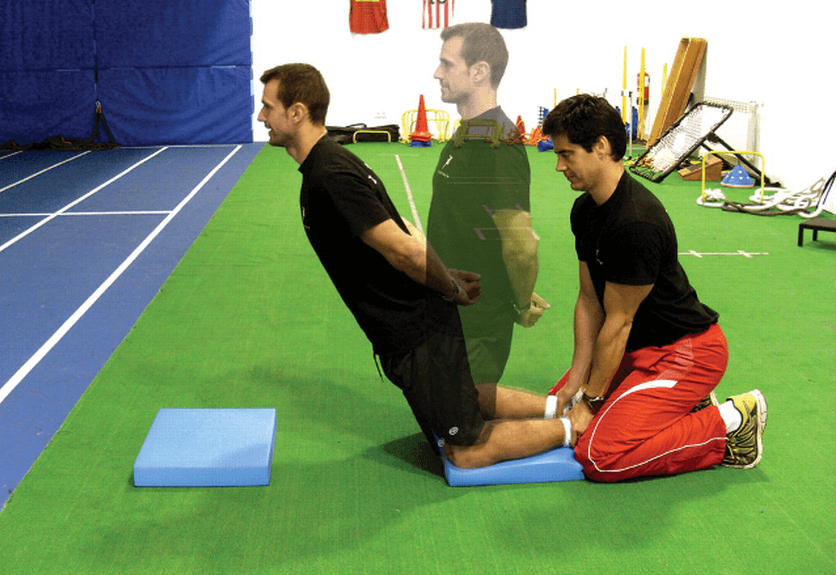 Over the last decade, strength sports have witnessed a surge in popularity. Despite medical advancements, the risk of injury remains the same as it has for decades [1]. Accordingly, understanding the mechanism of injury and reduction strategies are of the utmost importance, especially given the high likelihood of recurrence after the first incident.

The primary roadblock to progress may lie in the relative lack of good scientific evidence. The majority of the published literature focuses only on hamstring strains, and sample sizes are generally small. To help matters, a worldwide registration system for muscle injury would bolster the pool of evidence [1].

Unfortunately, direct measurement of the injury mechanism at the microscopic level is impossible at present. In an ideal world, researchers could study muscle strains in human subjects using three-dimensional movement analysis in a controlled laboratory setting. However, for some unknown reason, ethics boards are leery about approving studies where you purposefully tear people’s muscles. Fortunately, the latest wireless motion-capture technology, which uses high-speed, mobile sensors that can be applied directly to an athlete’s skin while in action, may soon make what was previously a scientific pipe dream a reality [1]. 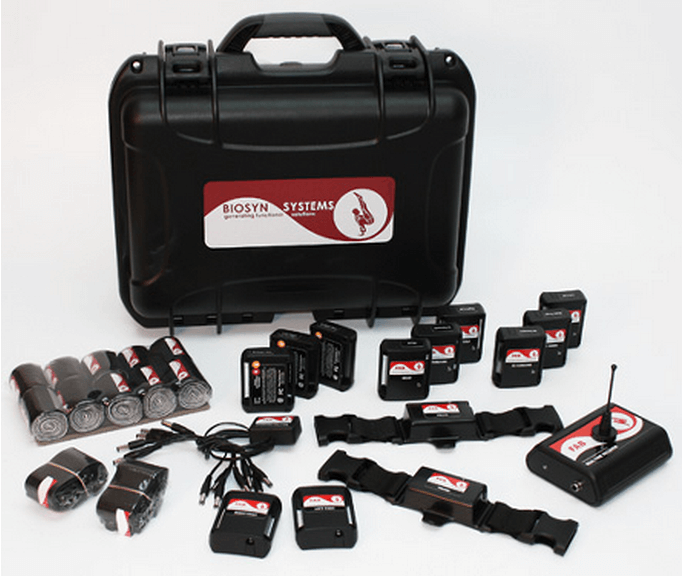 Next: Benefits of Static Stretching Stretched out of Proportion? →

Travis Pollen is an NPTI certified personal trainer and American record-holding Paralympic swimmer. He recently completed his Master’s degree in Biomechanics and Movement Science at the University of Delaware. He maintains a fitness blog and posts videos of his “feats of strength” on his website. Be sure to like him on Facebook and Twitter, as well.