Calorie skeptics wonder why we use the unit of energy, the Calorie, to predict changes in mass. This article shows you the way mass makes its way through your body and why it’s intrinsically linked with energy.

The Calorie has been used to describe the energy content of food and the energy cost of exercise since at least the 1800s (1, 2), and reams of research have since verified that energy balance is the primary determinant of long-term changes in body weight (3).

However, there are still skeptics. We like skepticism, and we understand why some people may be skeptical: a Calorie is a unit of heat (the amount of energy needed to raise the temperature of 1kg of water by 1 degree C), after all. Calories are directly measured in food by burning the food in a bomb calorimeter, and they’re directly measured in humans by measuring how much heat we expel. The human body extracts energy from food a little more elegantly than a fire does, and the human body is certainly more than a fancy heater, so that skepticism isn’t without merit.

What I aim to do in this article is start by ignoring energy and heat entirely and focus on something more concrete: mass. How does mass enter and leave the body? Once you understand how your body gains and loses mass, it should make much more sense why the Calorie, a unit of heat, serves as a valid and reliable proxy.

One final note before diving in: If you already buy the Calories in – Calories out (CICO) model of energy regulation hook-line-and-sinker, this will still be a valuable article for you. For starters, there may be quite a few interesting physiology facts you weren’t aware of. Furthermore, this basic line of reasoning will help you explain this very fundamental concept to CICO skeptics.

Your body is composed of a lot of different tissues and substances, but the ones that comprise the vast majority of your bodyweight include: skeletal muscles, fat tissue, bones, organs, and, of course, the water within and between cells. Barring any major diseases, your organs and bones don’t change in mass that much (relatively speaking; they can certainly increase or decrease in weight by a few pounds, but there are pretty finite limits), so we’ll mostly ignore them. We’ll only briefly discuss water as well, as changes in hydration status can only account for short-term weight swings, not long-term weight changes. You’ll lose water as you lose weight and gain water as you gain weight, but the percentage of your body composed of water remains fairly consistent over the medium-to-long run. Large fluctuations in body mass over the medium-to-long term are primarily driven by changes in muscle and fat mass, so that’s what we’ll focus on.

So, let’s discuss how mass gets from your food to your muscles and fat tissue.

Before pressing forward, I need to clarify something: I said that amino acids, fatty acids, and simple sugars are mostly transported across your intestinal lining into circulation. A small portion won’t be absorbed and will wind up in your poop (4). Now, in healthy folks eating a normal diet, that portion will be relatively small (though it may increase a bit if you eat a lot of insoluble fiber). However, with some diseases or with extreme fat intakes, you may excrete a bit more of the food you eat. That’s generally accompanied by diarrhea or steatorrhea (Google the second term at your own risk), so it’s not something to worry about if you have normal poops. The stuff you poop out, incidentally, doesn’t count toward “Calories in” (or, for now, “mass in”); until something crosses your intestinal lining, it’s not inside your body yet. Your entire digestive tract, from your mouth to your anus, is continuous with the outside world. The “inside” of your body starts just beneath the surface of your skin, and just inside the lining of your intestines.

Now that you’ve gotten the mass inside your body, you need to do one of three things:

Amino acids are used to build or repair proteins. Normally, the amount of protein your body makes will roughly equal the amount of protein it breaks down over a given period of time, which equates to no net change in mass. However, if there’s a trigger to synthesize a lot more of a particular protein than you’re breaking down (i.e., resistance training as a trigger to synthesize more contractile and structural proteins in your muscles), some of those amino acids will be incorporated into the new proteins, resulting in a net gain in mass.

Glucose is stored as glycogen (a long, branching chain of glucose molecules) primarily in two places: your liver and your skeletal muscles. Your liver can hold about 100g of glucose, and your muscles can store another 300-600g, depending on how jacked you are. Each gram of glycogen will also attract about 3-4g of water (5), so going from maximum glycogen storage to zero glycogen storage can swing your body weight by up to ~3.5kg (~7-8lbs), but glycogen storage capacity doesn’t change too much, meaning it can’t explain long-term changes in body mass.

Finally, free fatty acids will be packaged into triglycerides and transported to your muscles and fat cells. Fat in your muscles can be stored either intracellularly or extracellularly. Intracellular fat is “good,” providing your muscles with easy access to fats to burn during exercise. Extracellular fat in your muscles is “bad,” and is associated with inflammation and metabolic diseases. The vast majority of your fat will be stored as triglycerides in dedicated fat deposits beneath your skin or around your organs. Unlike proteins and glycogen, your body can store and subsequently get rid of massive amounts of fatty acids. 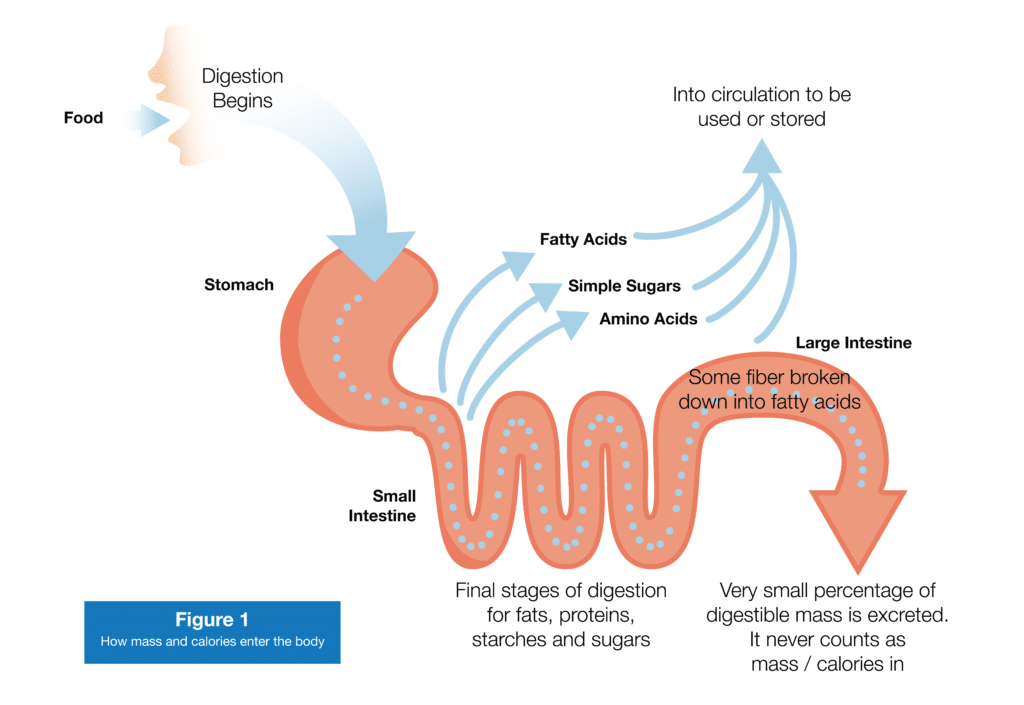 Proteins are responsible for almost all of the interesting things that happen in your body, so I’m not going to expand on “using” amino acids too much – doing so would turn this from a short article into a small library.

Glucose and fatty acids are both primarily used to produce adenosine triphosphate (ATP), which is what your body uses as energy for almost all of the billions of chemical reactions that are occurring inside you at any given moment. The final products of their breakdown are carbon dioxide (CO2) and water (H2O). Amino acids can also be used to produce ATP. First they need to be deaminated (removing the part of the amino acid that contains nitrogen), and then the remaining bits can enter the same set of reactions that produce ATP, CO2, and H2O.

Finally, where there’s a shortage of amino acids, fatty acids, or glucose, your body can synthesize the macronutrient it lacks from the other sources it still has in abundance. All three nutrients can be broken down to form pyruvate, which is the molecule at the “metabolic crossroads.” Pyruvate can be used to make more glucose via a process called gluconeogenesis (which becomes more common with very high protein intakes and very low carbohydrate intakes), more fatty acids via a process called de novo lipogenesis (which becomes more common with carbohydrate overfeeding), and more amino acids (which becomes more common when you don’t eat enough protein). Furthermore, pyruvate can be used to make ketones, which can also be used to produce ATP. 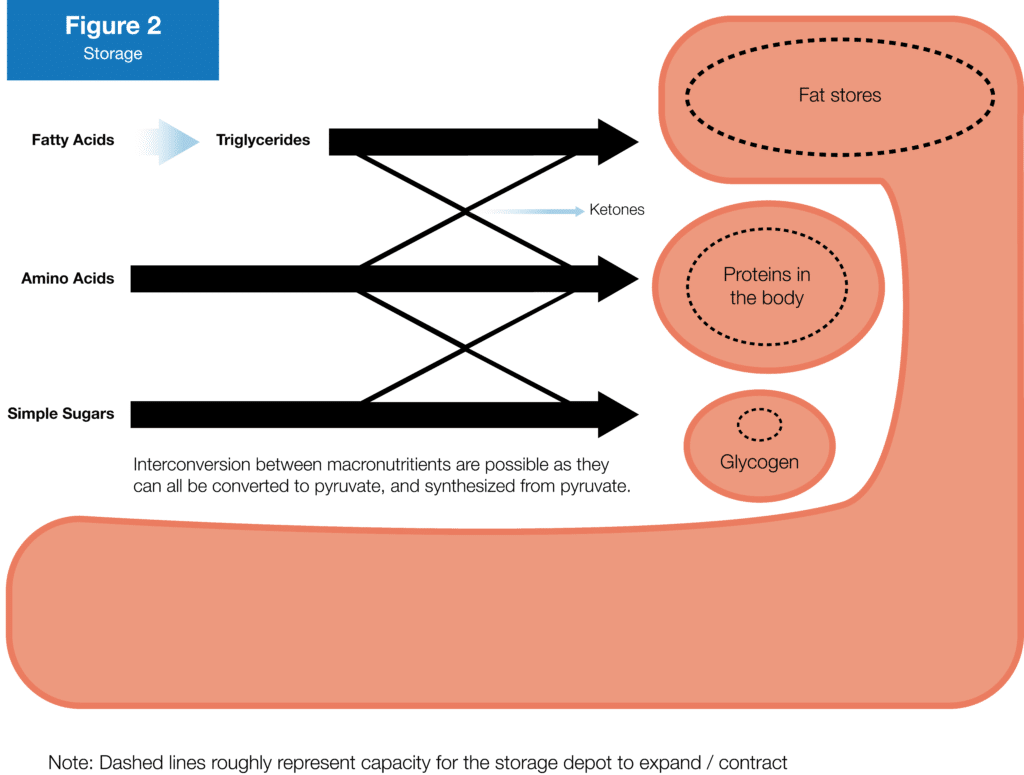 Getting rid of stuff

Here’s where things get cool. I don’t think people stop to consider where the mass actually goes when they lose weight. The vast majority of it leaves your body either via exhalation or urination. The CO2 you make when producing ATP from glucose, fatty acids, or amino acids is transported to your lungs and exhaled. The nitrogen-containing bits of amino acids that are broken down are taken to the liver and incorporated into urea and then excreted via urine, along with the water produced when making ATP (6).

So, to recap, food enters your mouth, and the vast majority of the carbohydrate, protein, and fat in that food enters your bloodstream as glucose, amino acids, and triglycerides. Amino acids can be incorporated into new proteins, glucose can be stored as glycogen, and triglycerides can be stored in adipose tissue. Of those three options, the synthesis and breakdown of proteins and the increases and decreases in stored fat can both contribute to long-term changes in mass, while changes in stored glycogen will only contribute to transient fluctuations in mass. When glucose, amino acids, and fatty acids are broken down to produce ATP, the main byproducts are H2O, CO2, and urea. You remove that mass from your body via exhalation and urination. 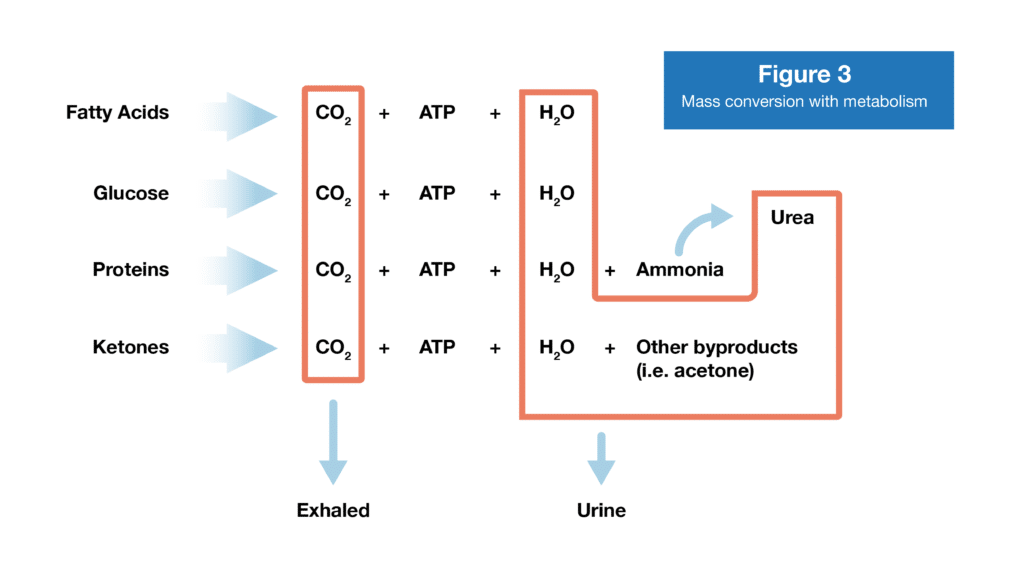 By this point, you should have a pretty good idea of how mass makes its way through your body, so now we turn to the major question: What does any of this have to do with Calories (a unit of heat)?

To answer this question, ATP is the key. Remember, glucose, fatty acids, and amino acids are all broken down to produce ATP before their byproducts (H2O, CO2, and urea) leave the body. ATP then goes on to supply the energy for almost all of the chemical reactions in your body. However, the production and use of ATP isn’t 100% efficient. About 40% of that energy goes toward accomplishing useful work, and the other 60% is dissipated as heat (i.e. Calories; 8). Crucially, the efficiency of those reactions is ~40% regardless of whether the ATP was synthesized from the breakdown of amino acids, glucose, or fatty acids (9). Finally, some additional heat is lost when ATP is actually utilized; incidentally, ATP utilization is also about 40% efficient (40% of the energy is used to accomplish productive work, and 60% is lost as heat).

So, a given mass of amino acids, glucose, or fatty acids can be used to produce a given amount of ATP and a relatively fixed portion of the energy that goes into producing and using ATP will be dissipated as heat. Your body can produce about the same amount of ATP (and thus heat) from 1g of glucose and 1g of amino acids, which is why they’re both labeled as having 4 Calories per gram. On the other hand, you can produce a little more than twice as much ATP from 1g of fat as you can from 1g of glucose or amino acids, which is why fat is labeled as having 9 Calories per gram (7).

Because the mass of the macronutrients in a food or in your body tissues is coupled with ATP production, and since the use of ATP is coupled with heat production, the difference between energy consumption and expenditure provides an exceptionally good proxy for changes in mass.

I hope this article clears up some of the confusion about why we discuss Calories so much when we talk about weight gain or weight loss, or at least provides a useful explanation you can provide to CICO skeptics. In the second part of this series, I’ll explain how things can get a little more complicated in the real world, and why the CICO model may not appear to work sometimes, even though it’s almost self-evidently accurate.

Note: This article was first published in Volume 1, Issue 8 of MASS Research Review.