It’s always interesting to see how long it takes for scientific practices to gain traction on the internet, and then in gyms everywhere.

Sometimes there’s an exciting paper, it gets discussed on reddit and forums across the internet, and then people become guinea pigs within weeks or months.

Other times, it’s a slow burn – creatine has been researched for well over 2 decades, but only recently (in no small part because of the great work of Examine.com) have most people accepted that it’s both safe and effective.

Daily Undulating Periodization (DUP), also called Daily Nonlinear Periodization, has been another beast entirely.  It’s an idea that seems to be gathering cobwebs in the fitness world at large, in spite of the fact that it’s been well-supported in the scientific literature for over a decade.

Sure, a few articles on popular websites have popped up here and there, and a lot of the better coaches have incorporated DUP into their programming, but the concept of it hasn’t taken root generally yet.  It sounds so scientific and complicated, and that scares people.

However, I’m here to explain it in simple terms, and tell you how you can use it in your own training programs.

Daily Undulating Periodization primarily serves to mitigate the repeated bout effect – the idea that the more you’re exposed to a stimulus, the weaker your reaction to it will be.  Think about your first days in the gym vs. now – back then you gained strength and size much faster, and you got much sorer after each session – that’s the repeated bout effect in action.

With conventional training, you’re exposing your body to essentially the same stimulus every time you train.  Sure, you’re going to apply some sort of progressive overload, but the volume is similar, the weights are similar, the reps are similar, and the goal is incremental progress.  An alternative is a periodized plan, with shifts in training variables every few weeks.

However, the theory behind DUP is that even periodized plans n’n’t go far enough in varying the stimulus to mitigate the repeated bout effect – several weeks is still plenty of time to adapt to a stimulus.  Indeed, some research from Charles Poliquin showed as much back in the 80s – changing stimulus every 2 weeks wasn’t any better than classic linear periodization (1).

With DUP, rather than changing your volume/intensity/rep ranges every few weeks, you change them every day you train.  That way, your muscles don’t adapt with as much specificity as they otherwise could, decreasing the impact of the repeated bout effect allowing responsiveness to training to remain higher.

Now I’m sure one of the questions I’m going to get is, “So bro, basically this is saying that muscle confusion is scientific, right?”

I almost hate to dignify this with a response, but I know I need to beforehand – Daily Undulating Periodization is only “muscle confusion” in the broadest of senses.  It maintains that the body will respond more strongly to more novel stimuli, BUT without the haphazardness of what is typically seen as “muscle confusion.”  This isn’t barbell curls today, dumbbell curls tomorrow, preacher curls after that, followed by drag curls = all kinda gainz.

It’s more like squat with more reps and volume today, then squat heavy doubles a couple days from now, and squat with a classic 3-5 sets of 5-6 reps a couple days after that.  You still get the motor learning benefits of frequent exposure to a motor patterns, while retaining the benefits of enhanced muscular responsiveness to changes in stimulus.

So, enough theory – let me throw a few studies at you as proof of concept:

In one of the classic studies in this area, two groups of subjects that had been training for an average of about 5 years prior to the study (not elite athletes by any stretch of the imagination, but they at least had some time under the bar) used either a linear periodization, or aDaily Undulating Periodization training plan. 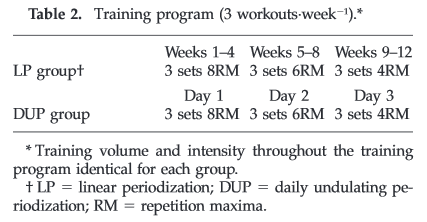 The results?  Mindboggling.  These two groups had put in essentially the exact same work over 12 weeks.  The workouts were the same, the order and structure were just different.

Of course, to be honest about the data, there is one study showing that block periodization may be slightly better than DUP under certain circumstances.

However, the fact remains, DUP is a better setup than most of the popular programs out there.  So, to make this article useful, let’s go into how you can set up a simple DUP program for yourself, and how to make adjustments moving forward.

Step 1:  Choose exercises.  These should be the exercises you’re trying to improve in, or close variations of them (i.e. closegrip bench is fine for bench press, but DB incline may not be the best choice)

Step 2:  Pick 3 different set/rep schemes for each exercise.  The Rhea study showed that 3×4, 3×6, and 3×8 is plenty of variety, but some coaches I’ve talked to who rely heavily on DUP have told me that larger swings (even going all the way from sets of 20 one day to singles or doubles on another) works as well.  In general, make these in line with your primary goal.  If you’re trying to gain size, 12s, 8s, and 5s might be perfect.  If strength is your main goal, 6s, 4s, and 2s might be a better option.

Step 3:  Define how you’re going to overload each lift and set/rep scheme

Step 4:  When you plateau on one set/rep scheme, make some substitutions that keep the integrity of overall program intact.

Bench 5×5, progress by adding sets until 8 sets are attained, then drop back to 5 sets and add weight

High bar squat 3×10, progress by adding sets until 5 sets are attained, then drop back to 3 sets and add weight

Chain squat, Start at your current 5rm.  Add 5 pounds each week until you can no longer do a double.

2 Board press, 4×2 – progress by adding sets until 8 sets are attained, then drop back to 4 sets and add weight.

Rack pull from mid shins – work up to a conservative 3rm.  Pull it for one more rep each week until you hit it for 5 reps.  Then add weight and start over with 3 reps.

Once you stall with one of your progressions, simply substitute it for something that accomplishes the same purpose (max strength, hypertrophy, or a blend thereof) and keep rolling.

Scary sounding programs aren’t so intimidating when you can apply a paint-by-numbers approach to building them, are they?  😉

Or, if you don’t want to add your own creative flare, you can just run a linear program for each lift on each day, but still achieve DUP simply by rotating workouts.  So instead of crazy sets/reps/progressions, it could be as simple as sticking with the same set/rep scheme on day 1, having a different one for day 2, and having another one yet for day 3, and running each training day as if it was a linear progression – adding weight as you’re able.  Like:

It can be as simple as this example, or way more complicated than my first example (adding in RPEs, biofeedback, and all kinds of goodies).  The elegance of it is that it’s not a rigid workout – it’s a system you can work with regardless of your experience and confidence in programming.

Hopefully now another bogeyman (along with the recently slayed myth of cardio making you small and weak) can be laid to rest.

p.s. if this is a concept that interests you, I’d suggest you check out Dr. Mike Zourdos’s stuff.  He’s a really bright guy and another PLer who has done a lot of research on Daily Undulating Periodization.